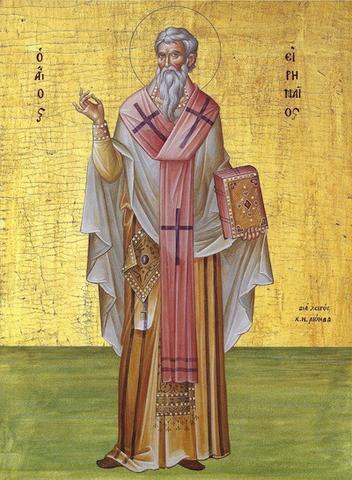 Now you can listen to St. Ireneaus’ Against Heresies in a newly released audio version of this work from LibriVox. This is an actual reading of the text, not some computer audio voice. The entire text can be listened to or downloaded for listening later at no charge and the recordings have been released into the public domain.

Some quotes from Saint Irenaeus

“Wherefore we must obey the priests of the Church who have succession from the Apostles, as we have shown, who, together with succession in the episcopate, have received the certain mark of truth according to the will of the Father; all others, however, are to be suspected, who separated themselves from the principal succession.” Against Heresies, (Book IV, Chapter 26)

“But it is not possible that the Gospels can be either more or fewer in number than they are. For since there are four zones of the world in which we live, and four principal winds, while the church has been scattered throughout the world, and since the ‘pillar and ground’ of the Church is the Gospel and the spirit of life, it is fitting that she should have four pillars, breathing incorruption on every side, and vivifying human afresh. From this fact, it is evident that the Logos, the fashioner demiourgos of all, he that sits on the cherubim and holds all things together, when he was manifested to humanity, gave us the gospel under four forms but bound together by one spirit.” Against Heresies, 3.11.8

“Error, indeed, is never set forth in its naked deformity, lest, being thus exposed, it should at once be detected. But it is craftily decked out in an attractive dress, so as, by its outward form, to make it appear to the inexperienced (ridiculous as the expression may seem) more true than the truth itself.” Against Heresies (Book I)