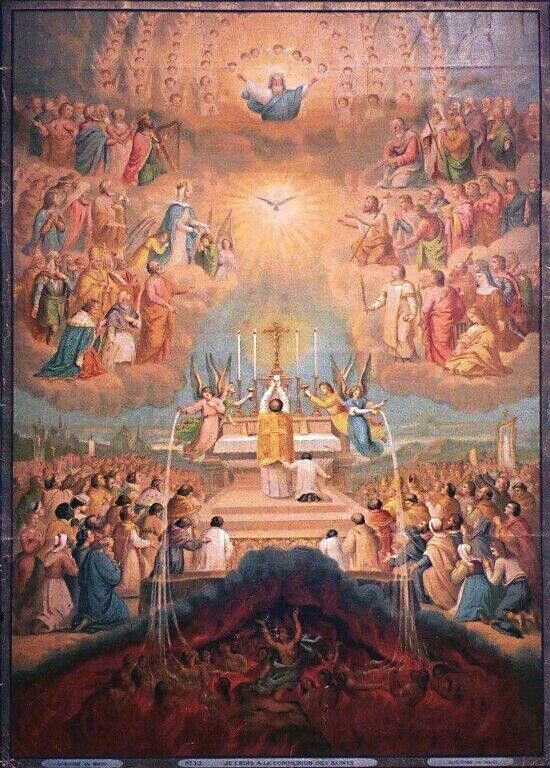 The persecutions which the evil enemy has stirred up at various times against the most holy sacrifice of the Mass are a proof how sacred a thing it must be, and how obnoxious to the devil; otherwise he would not attack it with such violence.

In the first ten centuries of the Christian Church teachers of heresy were indeed not wanting, but none of them ventured to assail the Mass, much less did they attempt to do away with it. The heretic Berengarius of Tours was the first who presumed to speak and write against the holy Mass. His erroneous teaching was exposed and triumphantly refuted by the Catholic theologians of the day; it was, moreover, condemned by the General Council of the Church. Before his death the unhappy man abjured his errors, and ended his days as a repentant son of the Catholic Church.

At the commencement of the twelfth century the impious Albigenses appeared in France, amongst other disgraceful tenets they held marriage to be an unlawful state, and encouraged profligacy. They did, it is true, take no exception to the celebration of solemn High Mass in the presence of a large assembly of people, but they would not tolerate Low Mass, at which but few persons assisted. In fact, they prohibited them, under pain of fines and imprisonment. In connection with these heretics Cesar of Heisterbach, who lived about the same time, relates the following incident:

Although the Albigenses had forbidden priests, under heavy penalties, from saying Low Mass, a certain pious priest would not allow himself to be deterred by so unjust a prohibition from saying Mass privately. When this became known, he was arrested and brought before the council, who said to him: “ Information has reached us that, in defiance of our prohibition, you have said a Low Mass, and committed a grave offence; we have therefore caused you to be brought before us, to answer for yourself whether it is so.” The priest instantly replied without any sign of fear: “I will answer in the words of the holy apostles, who said, when it was inquired of them before the Jewish Council whether they had violated the law by preaching in the name of Christ, for ‘We ought to obey God, rather than men.’ (Acts v. 29.) For this reason, therefore, in spite of your unjust prohibition, I said Mass to the honor of God and of His blessed Mother.”

The judges, greatly infuriated by this bold reply, condemned the pious priest to have his tongue torn out in the presence of all the people. The priest suffered this cruel sentence with the utmost patience; he went straight to the church, his mouth yet bleeding, and, kneeling humbly before the altar at which he had said Mass, poured out his complaint to the Mother of God. Being unable any longer to speak with his tongue, he raised his heart to her with all the more fervor, entreating her that his tongue might be restored to him. So urgent was his supplication that the blessed Mother of God appeared to him, and with her own hand replaced his tongue in his mouth, saying that it was given back to him for the sake of the honor he had paid to God the Lord and to her by saying Mass, and exhorting him diligently to make use of it in that manner for the future. After returning heartfelt thanks to his benefactress the priest returned to the assembled people, and showed them that his tongue had been given back to him, thus putting to confusion the obstinate heretics, and all who had displayed hostility to the holy Mass.

The words of the blessed Father Cesar, in the preface to the little book whence this story is taken, allow of no doubt as to its truth. “ I take God to witness’ he says, “ that I have inserted nothing in this work but what I have seen with my own eyes, or heard from the lips of men who would sooner die than utter a falsehood.” Wherefore this true story ought to convince all who think otherwise that the holy Mass is specially pleasing to the most high God.

From the days of the apostles until the present time the holy sacrifice of the Mass has had no more vehement opponent than the unhappy Martin Luther, who not only attacked but decried this divine mystery. He did not do this of himself, nor when he first apostatized, but at a later period, and at the instigation of the devil. In fact the deluded man himself acknowledges in his writings that his teaching comes from the devil, and only at the suggestion of the evil one has he abolished the Mass as an act of idolatry, although he must have known full well that the devil is the hater of all that is good, and teaches mankind naught but what is evil. Besides, Luther might have considered that if the Mass were idolatrous the devil would not oppose it, much less desire that it should be done away with; on the contrary, he would promote it and praise it, because the more Masses were said the more acts of idolatry would be committed, and greater dishonor done to the most high God.

In this wise Satan has deprived not the Lutherans only, but all the Protestant sects that have arisen after him, of the salutary sacrifice of the holy Mass, and thereby done them an irreparable injury. In fact he has made this sublime mystery so repugnant to them that they declare it to be a denial of the sacrifice of the cross, and an accursed worshiping of idols, as we read in the Heidelberg catechism of the Calvinists. Such horrible profanity is enough to fill every pious heart with dread, and cause every good Christian to stop his ears. We will not devote much time to the refutation of such blasphemies; one argument will suffice to overthrow them.

If these heretical doctrines were true, it would follow as a matter of course that from the time of Christ no single person, not even were he an apostle or a martyr, could have been saved. The holy apostles and all their successors in the priesthood celebrated and offered to the most high God the sacrifice of the Mass; all holy martyrs and confessors heard Mass devoutly, and regarded it as the highest act of divine service. Now, if the holy Mass were idolatrous, and a denial of the one sacrifice of Christ, the holy apostles and all the faithful would have been guilty of idolatry, they would grievously have offended the divine Majesty, and rendered themselves worthy of eternal damnation. And since no person of any sense will credit such an assertion, no one can believe the Calvinistic teaching to be true. Rather than to Calvin and Luther, let us listen to St. Fulgentius when he says: “Hold fast the doctrine, and never permit yourself to doubt, that the only-be gotten Son of God became man for us, and for us offered Himself to Almighty God, to Whom the Catholic Church throughout the world now offers in faith and charity unceasingly the oblation of bread and wine.”

Who is roost worthy of our belief — a holy and enlightened teacher of the Church, or two apostates such as Calvin and Luther ? To these latter one may apply the words addressed by the learned Peter of Clugny to some other heretics: “ If your teaching were universally accepted, that is, if Christians were to abolish the holy sacrifice of the Mass, that would come to pass in this season of grace which never came to pass in the season of wrath: God would no longer be worshiped upon earth. Therefore, O ye enemies of God, listen when the Church of God tells you that a divine sacrifice is essential to her existence, and that in this sacrifice she offers the body and blood of the Saviour, and that alone; and what He did in His death, that she does whenever this offering is made.” Such are the words of the aforesaid father.

Let us therefore beware lest the same thing befall us that befell the unhappy heretics. For the evil one robbed them of the holy Mass to their unspeakable injury; but us Catholics, since he could not succeed in depriving us of it, he blinded in great measure so that we might not fully appreciate the magnitude of this holy sacrifice, and its immense potency. Doubtless it was due to Satan’s devices that for a considerable period this divine mystery was so seldom made the subject of sermons, that so little was said or written respecting it, and thus Catholics became careless about hearing Mass, or heard it indevoutly.

As a means of preventing this evil the Council of Trent commanded those who had the care of souls frequently to preach about the holy Mass. The decree is as follows: “ The holy synod charges pastors, and all who have the care of souls, that they frequently, during the celebration of Mass, expound, either themselves or by others, some portion of those things which are read at Mass; and that, amongst the rest, they explain some mystery of this most holy sacrifice, especially on the Lord’s days and festivals.” (Session xxii. ch. 8.) If the people are ignorant of the great value of holy Mass they do not love and esteem it as they ought; they never go to Mass on week-days, and on Sundays and holy days they are too often indifferent, irreverent, superficial; they absent themselves on a mere pretext, and without the slightest scruple of conscience.

But if they understand the vast efficacy and value of the holy Mass, they cannot fail to prize more highly this costly treasure, to love it more deeply, and assist at the divine oblation with greater reverence. There is in the Catholic Church no mystery more important, more consoling, more salutary, than this sublime mystery of the altar. If this truth were recognized aright, we should certainly see a larger attendance at Mass of week-days.