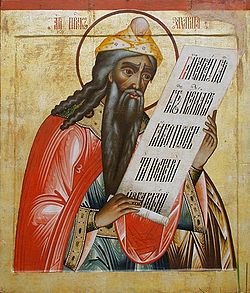 The Benedictus is the Song of Zechariah, or Canticle of Zachary, given in the Gospel of Luke 1:68-79, is one of the three canticles in the opening chapters of this Gospel, the other two being the “Magnificat” and the “Nunc dimittis”.

The Benedictus was the song of thanksgiving uttered by Zechariah who was filled with the Holy Spirit, on the occasion of the birth of his son, John the Baptist.

In the Roman Catholic Church, the Benedictus is part of The Divine Office, that takes place in the early morning hours. The canticle received its name from its first words in Latin: Benedictus Dominus Deus Israel, “Blessed be the Lord God of Israel”.

[68] Benedictus Dominus Deus Israel, quia visitavit, et fecit redemptionem plebis suae:
Blessed be the Lord God of Israel; because he hath visited and wrought the redemption of his people:

[69] Et erexit cornu salutis nobis in domo David pueri sui,
And hath raised up an horn of salvation to us, in the house of David his servant:

[70] Sicut locutum est per os sanctorum, qui a saeculo sunt, prophetarum ejus:
As he spoke by the mouth of his holy prophets, who are from the beginning:

[71] Salutem ex inimicis nostris, et de manu omnium qui oderunt nos:
Salvation from our enemies, and from the hand of all that hate us:

[73] Jusjurandum, quod juravit ad Abraham patrem nostrum, daturum se nobis
The oath, which he swore to Abraham our father, that he would grant to us,

[74] Ut sine timore, de manu inimicorum nostrorum liberati, serviamus illi
That being delivered from the hand of our enemies, we may serve him without fear,

[75] In sanctitate et justitia coram ipso, omnibus diebus nostris.
In holiness and justice before him, all our days.

[76] Et tu puer, propheta Altissimi vocaberis: praeibis enim ante faciem Domini parare vias ejus,
And thou, child, shalt be called the prophet of the Highest: for thou shalt go before the face of the Lord to prepare his ways:

[78] Per viscera misericordiae Dei nostri, in quibus visitavit nos, oriens ex alto:
Through the bowels of the mercy of our God, in which the Orient from on high hath visited us:

[79] Illuminare his qui in tenebris et in umbra mortis sedent: ad dirigendos pedes nostros in viam pacis.
To enlighten them that sit in darkness, and in the shadow of death: to direct our feet into the way of peace.

GLORY be to the Father, and to the Son, and to the Holy Ghost. As it was in the beginning, is now, and ever shall be, world without end. Amen.