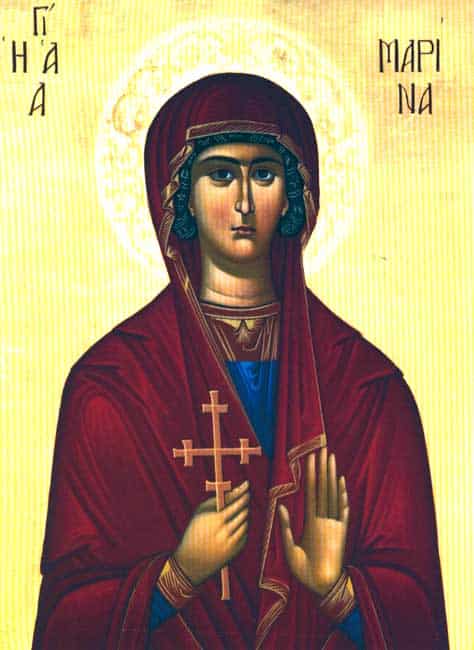 Margaret, known as Saint Margaret of Antioch in the West, and as Saint Marina the Great Martyr in the East, is celebrated as a saint by the Roman Catholic Church on July 20, and on July 17 in the Orthodox Church. St. Margaret’s voice was one of the Voices heard by St. Joan of Arc. St. Margaret is invoked against backache; she is a patroness of women in childbirth. St. Margaret is especially invoked for deliverance from demonic possession.

Antioch was an ancient Greco-Roman city on the eastern side of the Orontes River. Its ruins lie near the modern city of Antakya, Turkey. It was an influential early center of Christianity. Up until the taking of Constantinople by Western crusaders in the year 1204, the relics of the Great Martyr Margaret (Marina) were in the Panteponteia monastery. According to other sources, they were located in Antioch until the year 908 and from there transferred to Italy. Now they are in Athens, in a church dedicated to the holy Virgin Martyr. Her venerable hand was transferred to Mount Athos, to the Batopedi monastery. (Source: Orthodox Church in America)

ST. MARGARET was the daughter of a pagan priest at Antioch. She lost her mother in infancy and was placed in the care of a nurse in the country, who was a Christian, and whose first care was to have her little charge Baptized and to give the child a Christian education. Margaret grew up a modest, pious virgin, and when she returned to her father he was charmed with the grace and virtue of his daughter. He regretted only one thing; she took no part in the worship of the idols. When she told him the reason he was greatly displeased, for she stated that she was a Christian, and that nothing should separate her from the love of Christ.

Her father tried every means to change her mind, and when all his endeavors failed became enraged and drove her forth from his house. Margaret returned to her nurse and became her servant, doing all kinds of menial work, and at the same time perfecting herself in virtue.

About this time Emperor Diocletian began to persecute the Christians. One day Alybrius, the prefect of the city, saw Margaret, and fell in love with her. He sent a messenger to ask her in marriage. The pious Virgin was filled with consternation at the proposal and replied to the messenger: “I can not be espoused to your master, because I am the spouse of Our Lord Jesus Christ. I am promised to Him, and to Him I wish to belong.” When the prefect heard this, he became furious with rage, and gave orders to have the Virgin brought to him by force.

When she appeared before him he thus addressed her: “What is your name and condition?” She replied: “I am called Margaret, and belong to a noble family. I adore Christ and serve Him.” The prefect now advised her to abandon the worship of a crucified God. Margaret asked him, “How do you know that we worship a crucified God?” The prefect replied: “From the writings of the Christians.” Margaret continued: “Why did you not read further on? These would have told you that the Crucified rose on the third day, and that He ascended into Heaven. Is it love of truth to believe in the abasement of Christ and to reject His glorification, when both are related in the selfsame?”

At this reproof the prefect became angry and ordered the tender Virgin to be cruelly scourged, placed on the rack, and torn with iron combs. Then she was cast into prison. There Margaret fervently thanked God for the victory she had achieved and implored His help for the combat yet in store for her. Suddenly there appeared to her the arch-enemy of mankind in the shape of a furious dragon, threatening to swallow her. The brave Virgin feared him not, but made the Sign of the Cross, and the monster vanished. Then her desolate prison cell became suffused with Heavenly light, and her heart was filled with Divine consolation. At the same time her terrible wounds were suddenly healed, and not the least scar was left.

Next day Margaret was again brought before the prefect. Surprised at her complete recovery from the effects of his cruelty, he remarked that no doubt it was due to the power of the pagan gods, and exhorted her to show her gratitude to them by sacrificing to the idols. Margaret maintained that she had been healed by the power of Christ alone and declared that she despised the heathen gods. At this, the rage of Alybrius knew no bounds. He ordered lighted torches to be applied to Margaret’s body, and then had her cast into icy water to intensify her torture. But scarcely had this been done when a violent earthquake occurred. Her bonds were severed and she rose unscathed from the water, without a mark of the burns caused by the flaming torches. On witnessing this miracle, a great number of spectators were converted to the Faith.

Finally the prefect ordered Margaret to be beheaded. Her glorious Martyrdom and death occurred about the year 275.

THE history of the Virgin Martyr St. Margaret teaches us that we can and ought to serve God even in youth. In the Old Law God commanded all the first-born and the first-fruits to be offered to Him. “Thou shalt not delay to pay thy tithes and first-fruits. Thou shalt give the first-born of thy sons to Me” [Ex. 22: 29].

Certainly our whole life ought to be dedicated to the service of God; but from the above command we are to understand that God especially desires our service during the early years of our life. They are our first-fruits. St. Augustine calls the years of youth the blossoms, the most beautiful flowers of life, and St. Thomas Aquinas writes: “What the young give to God in their early years, they give of the bloom, of the full vigor and beauty of life.”

Youth is the age beset with countless temptations. Safety is found only in the service of God, by obedience, humility, and docility. This is not so difficult as it appears, and Our Lord Himself invites you to His service, saying: “My son, give Me thy heart” [Prov. 23: 26], and, “Taste and see that the Lord is sweet” [Ps. 33: 9].

Prayer of the Church

WE BESEECH Thee, O Lord, grant us Thy favor through the intercession of Thy blessed Virgin and Martyr Margaret, who pleased Thee by the merit of her purity and by the confession of Thy might. Through Christ our Lord. Amen.

Novena in Honor of Saint Margaret of Antioch

ALMIGHTY and eternal God! With lively faith and reverently worshiping Thy Divine Majesty, I prostrate myself before Thee and invoke with filial trust Thy supreme bounty and mercy. Illumine the darkness of my intellect with a ray of Thy Heavenly light and inflame my heart with the fire of Thy Divine love, that I may contemplate the great virtues and merits of the Saint in whose honor I make this novena, and following his example imitate, like him, the life of Thy Divine Son.

Moreover, I beseech Thee to grant graciously, through the merits and intercession of this powerful Helper, the petition which through him I humbly place before Thee, devoutly saying, “Thy will be done on earth as it is in Heaven.” Vouchsafe graciously to hear it, if it redounds to Thy greater glory and to the salvation of my soul. Amen.

Prayer in Honor of St. Margaret

O GOD, grant us through the intercession of Thy holy Virgin and Martyr Margaret, undauntedly to confess the Faith, carefully to observe the chastity of our state of life, and to overcome the temptations of the world, the flesh, and the devil, and thereby escape the punishments of eternal damnation. Amen.

ST. MARGARET, holy Virgin and Martyr, thou didst faithfully preserve the robe of holy innocence and purity, valiantly resisting all the blandishments and allurements of the world for the love of thy Divine Spouse, Jesus Christ; help me to overcome all temptations against the choicest of all virtues, holy purity, and to remain steadfast in the love of Christ, in order to preserve this great gift of God. Implore for me the grace of perseverance in prayer, distrust of myself, and flight from the occasions of sin, and finally the grace of a good death, so that in Heaven I may “follow the Lamb whithersoever He goeth.” Amen.

My Lord and God! I offer up to Thee my petition in union with the bitter passion and death of Jesus Christ, Thy Son, together with the merits of His immaculate and blessed Mother, Mary ever virgin, and of all the Saints, particularly with those of the holy Helper in whose honor I make this novena.

Look down upon me, merciful Lord! Grant me Thy grace and Thy love, and graciously hear my prayer.
Amen.

THE ORTHODOX CHURCH IN AMERICA
Saint Marina of Antioch