The stories and special intercessory powers of 14 early Saint-Martyrs invoked for numerous special needs, such that they came to be called “The 14 Holy Helpers.” St. Barbara, St. Blaise, St. Christopher, St. George, St. Catherine, etc. They are invoked against throat ailments, lightning, diabolical possession, fire, family troubles, etc. Includes prayers to each Saint. This book links the present age to the earliest centuries of the Church.

Among the Saints invoked were these 14 who already had patronage over certain illnesses or tragedies:

St. Christopher and St. Giles, plagues.
St. Denis, headaches.
St. Blaise, ills of the throat [although St. Ignatius of Antioch is also a patron of those with sore throats].
St. Elmo, patron of abdominal maladies [and one of the several Saints having patronage over childbirth, which is not an illness, of course, as well as patron of sailors].
St. Barbara, against fever.
St. Vitus, [with St. Dymphna, against epilepsy].
St. Pantaleon, patron of physicians.
St. Cyriacus, recourse in time of temptations, especially at the hour of death.
Sts. Christopher, Barbara, and Catherine were appealed to for protection against a sudden, unprovided death.
the aid of St. Giles was implored for making a good confession.
St. Eustace, patron of all kinds of difficulties, especially family troubles.
Domestic animals were also attacked by the plague: Sts. George, Erasmus, Pantaleon and Vitus were invoked for their protection.
St. Margaret of Antioch is the patron of safe childbirth deliveries [along with St.Gerard Majella and Raymond Nonnantus].

About the Author of The Fourteen Holy Helpers

The Rev. Father Bonaventure Hammer, O.F.M., was a priest and author of the nineteenth and twentieth centuries. His The Fourteen Holy Helpers: Early Christian Saints Who Are Powerful with God was compiled to inspire all the faithful to invoke St. George, St. Blaise, and the rest of the Fourteen Holy Helpers. Father Hammer’s work was originally published in 1909 by the Benziger Brothers, New York, with the Nihil Obstat and Imprimatur. 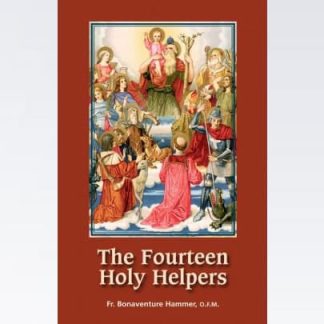 You're viewing: The Fourteen Holy Helpers US$ 17.00
Add to cart