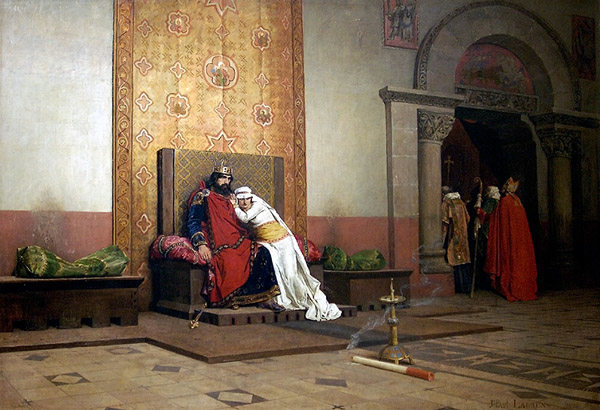 Since the time of the apostles, the term ‘anathema’ has come to mean a form of extreme religious sanction, known as excommunication.

The phrase “bell, book, and candle” refers to a Latin Christian method of excommunication by anathema, imposed on a person who had committed an exceptionally grievous sin. Evidently introduced by Pope Zachary around the middle of the 8th century, the rite is used by the Roman Catholic Church.

Anathema is not final damnation. God alone is the judge of the living and the dead, and up until the moment of death repentance is always possible. The purpose of public anathema is twofold: to warn the one condemned and bring about his repentance, and to warn others away from his error. Everything is done for the purpose of the salvation of souls.

The ceremony is described in the Pontificale Romanum, the last edition of the Tridentine Rite published before Vatican II.

The ceremony traditionally involved a bishop, with 12 priests bearing candles, and would solemnly be pronounced in some suitably conspicuous place. The bishop would then pronounce the formula of the anathema, which ends with the following words:

The bishop would then ring a bell, close a Holy Book, and he and the assisting priests would snuff out their candles by dashing them to the ground. However, the rite of anathema as described in the Pontificale Romanum only prescribes that the candles be dashed to the ground.

After the ritual, written notices would be sent to the neighbouring bishops and priests to report that the target had been anathematized and why, so that they and their constituents would hold no communication with the target. [2]
The frightful pronouncements of the ritual were calculated so as to strike terror into the ones so excommunicated and bring them to repentance.

For information on many cases of liturgical abuse within the Catholic church, including cases of high-profile Catholic clerics involved in illicit sexual relations, false prophets, thieves, heretical fraudsters and schismatics who infiltrated the Holy Catholic Church and its establishments, visit Vox Cantoris and its network of the traditional Catholic websites.


Related Article: Rite of Degradation of a Bishop, or an Archbishop: “Degradatio ab ordine pontificali” by Pope Benedict XIV