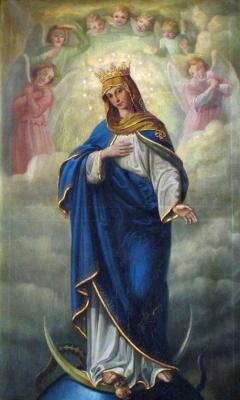 Source: “The Immaculate Conception of the Mother of God” by Bishop Ullathorne, William Bernard, 1806-1889.

The Morning Star is about to rise upon the night which overspreads the fallen world with its deep shadows. The East already warms, and the glorious Sun of Justice sends His rays before His coming.

That beautiful Star precedes Him on His way. It is full of His light, and is the reflection of His purity. Oh Lucifer ! no longer art thou the bringer of the light, but the prince and ruler of the darkness. And now thy kingdom is invaded by the dawning day, and Mary is the bringer of the light. The instant is come for that elected creature to appear, who, of a daughter of Eve, is made the Mother of God.

Chosen in the counsels of eternity: associated with the Son of God from the beginning of the sacred plan: revealed to the angels with her Son: assailed by the proud and aspiring Lucifer for her lowliness, because of Him who lifts up the lowly: revered by the angelic hosts as their Queen, and the animated temple of their Lord: proclaimed to our first parents as the antagonist of their destroyer, and as destined with her Son to crush the serpent’s head.

Novena in Honor of the Immaculate Conception

O most Holy Virgin, who didst find favor in God’s sight and hast become His Mother; O Virgin, immaculate in body and soul, in thy faith and in thy love, look down with pity on the wretched who in our need seek thy powerful protection.

May we never be caught in the snares around us, but rather may we all reach the harbor of salvation. Despite the awesome perils which threaten, may God’s Church and all Christian society sing out once again the hymn of deliverance, of victory and of peace. Amen.

Recite this prayer of St. Pius X to the Immaculate Virgin Mary for nine days from November 29 – December 7, or anytime during the year.