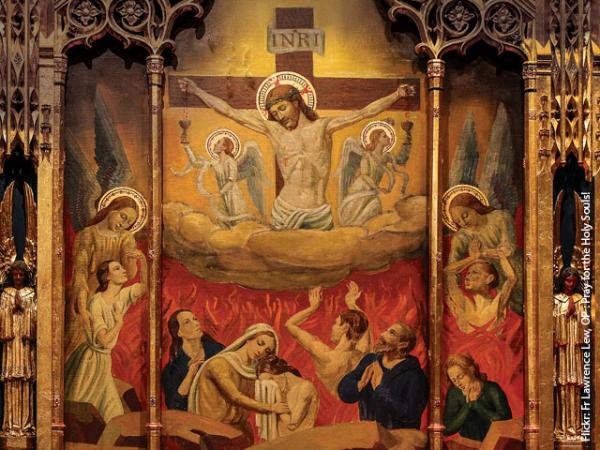 The feast of All Saints is intimately connected with the remembrance of the holy souls who, detained in purgatory to expiate their venial sins or to pay the temporal pains due to sin, are none the less confirmed in grace and will one day enter heaven. Therefore, after having joyfully celebrated the glory of the saints who are the Church triumphant in heaven, the Church on earth extends her maternal solicitude to the place of unspeakable torments, the abode of souls who equally belong to her.

“On this day,” says the Roman Martyrology, “commemoration of all the faithful departed, in which our common and pious Mother the Church, immediately after having endeavoured to celebrate by worthy praise all her children who already rejoice in heaven, strives to aid by her powerful intercession with Christ her Lord and Spouse, all those who still groan in Purgatory, so that they may join as soon as possible the inhabitants of the heavenly city.”

Nowhere in the Liturgy is more vividly affirmed the mysterious unity which exists between the Church triumphant, the Church militant and the Church suffering, and never is better fulfilled the double duty of charity and justice incumbent on every Christian by virtue of his membership of the mystical body of Christ.

It is through the very consoling dogma of the Communion of Saints that the merits and suffrages of the saints may benefit others. Whereby without infringing the indefeasible rights of divine justice, which are exercised in their full vigour after this life, the Church can join her prayers here on earth to those of the Church in heaven and supply what is wanting in the souls in Purgatory, by offering to God for them, by the Holy Mass, by indulgences, by the alms and sacrifices of her children, the superabundant merits of Christ’s passion and of His mystical members. Wherefore the Liturgy, the centre of which is the sacrifice of Calvary continued on the altar, has always used this pre-eminent means of exercising in favour of the departed the great law of charity ; for it is a precept of charity to relieve our neighbour’s wants as if they were our own, in virtue of the supernatural bond which unites in Jesus those in heaven, in purgatory and on the earth.

The Liturgy of the dead is perhaps the most beautiful and consoling of all. Every day, at the end of each hour of the divine office, we recommend to the divine mercy the souls of the faithful departed. In the Mass, at the Suscipe, the priest offers the sacrifice for the living and the dead and in a special Memento he implores the Lord to remember His servants who have fallen asleep in Christ and to grant them to dwell in consolation, light and peace.

Masses for the dead are already recorded in the fifth century. But to St. Odilo, fourth abbot of the famous Benedictine monastery of Cluny, is due the Commemoration of all the departed. He instituted it in 998 and prescribed that it should be celebrated the day following All Saints’ Day. Through the influence of this illustrious French congregation, the custom was soon adopted by the whole Christian world and it even sometimes became a day of obligation. In Spain, Portugal and the formerly Spanish parts of South America, priests, in virtue of a privilege granted by Benedict XIV, celebrated three Masses on November 2. A decree of Benedict XV, dated August 10, 1915, authorizes the priests of the whole world to do the same.

The Church reminds us in an Epistle, taken from St. Paul, that the dead will rise again, and tells us to hope, for on that day we shall all see one another in the Lord. The Sequence strikingly describes the last judgment when the good will be for ever separated from the wicked.

The Offertory reminds us that it is St. Michael who introduces souls into heaven, for as the prayers for the recommendation of the soul say, it is he who is “the chief of the heavenly host” in whose ranks men are called to fill the places of the fallen angels.

“The souls in purgatory,” declares the Council of Trent, “are helped by the suffrages of the faithful, especially by the sacrifice of the Altar.” The reason is that in Holy Mass the priest offers officially to God the ransom for souls, that is the blood of the Saviour. And Jesus Himself, under the elements of bread and wine, which recall to the Father the sacrifice of Golgotha, prays God to apply to these souls its atoning virtue.

Let us, on this day, be present at the Holy Sacrifice of the Mass when the Church implores God to grant to the faithful departed, who can now do nothing for themselves, the remission of all their sins (Collect) and eternal rest (Introit, Gradual, Communion), and let us visit the cemeteries where their bodies repose until the day when, in the twinkling of an eye, at the sound of the last trumpet, they will rise again to be clothed in immortality and gain through Jesus Christ the victory over death (Epistle).

INDULGENCED ACTS FOR THE POOR SOULS

An indulgence, applicable only to the Souls in Purgatory, is granted to the faithful, who devoutly visit a cemetery and pray, even if only mentally, for the departed.

The indulgence is plenary each day from the 1st to the 8th of November; on other days of the year it is partial.

A plenary indulgence, again applicable only to the Souls in Purgatory, is also granted when the faithful piously visit a church or a public oratory on November 2. In visiting the church or oratory, it is required, that one Our Father and the Creed be recited.