Sin and Its Consequences by Cardinal Manning

The book is very helpful in understanding the nature of sin and what it does to your soul and your relationship with our Lord. 264 page book, originally published in 1874.

Send Inquiry for Sin and Its Consequences by Cardinal Manning

What is the enemy of man: the world, the flesh, or the devil? Sin is the ultimate enemy of man, since it is the only thing that can ultimately keep us from God, our beatitude. This traditional understanding of the Church’s wisdom has led to the development of an elaborate theology of sin and its consequences, detailed here in full by Henry Cardinal Manning.

He reveals in characteristic style:

Far from causing scruples and fear, Cardinal Manning’s emphasis is on the healing and pardon that God’s grace and appropriate penance can bring to the soul. Ultimately, sin does not have the last say; God’s grace, through our cooperative repentance, does.

Sin and Its Consequences – Table of Contents

THE NATURE OF SIN

It is expedient for you that I go ; for if I go not, the Paraclete will not come unto you; but if I go, I will send Him to you ; and when He is come, He shall convince the world of sin. S. JOHN xvi. 7.

He that knoweth his brother to sin a sin which is not unto death, let him ask, and life shall be given to him who sinneth not to death. There is a sin unto death : for that I say not that any man ask. 1 S. JOHN v. 16.

Who can understand sins? From my secret sins cleanse me, God. PSALM viii.

THE GRACE AND WORKS OF PENANCE

Then Jesus was led by the Spirit into the desert to he tempted by the devil. S. MATT. iv. 1.

THE DERELICTION ON THE CROSS

From the sixth hour there was darkness over the whole earth until the ninth hour ; and about the ninth hour Jesus cried with a loud voice, saying : Eli, Eli, lama sabachthani ? that is to say, My God, My God, why hast Thou forsaken Me? S. MATT, xxvii. 45.

THE JOYS OF THE RESURRECTION

Jesus said unto her : Mary. She saith unto Him : Rabboni : that is to say, Master. S. JOHN xx.

Henry Cardinal Manning was one of the most important converts to come out of the Oxford Movement in mid-19th-century England. Initially an Archdeacon in the Anglican Church, Manning converted to Catholicism at 43 and became a staunch priest of the true Church in England. He eventually became the second Archbishop of Westminster, the head of the renewed Catholic Church in England. He acquired the land for Westminster Cathedral in London and was instrumental in the First Vatican Council and influencing the social doctrine of the Church under Pope Leo XIII.

Sin and Its Consequences by Cardinal Henry Edward Manning. 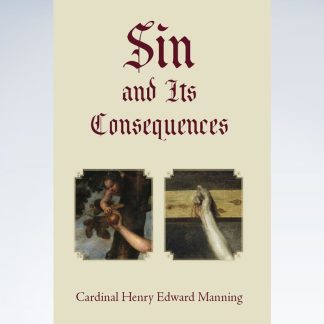 You're viewing: Sin and Its Consequences by Cardinal Manning US$ 19.00
Add to cart