Counsels to Confessors, by Saint Leonard of Port Maurice

This book is exactly what the title implies, sound advice for the healing of souls in the confessional. Saint Leonard was one of the great confessors of all time. He was a Franciscan and a missionary preacher. Softcover booklet: 80 Pages.

Send Inquiry for Counsels to Confessors, by Saint Leonard of Port Maurice

Counsels to Confessors, by Saint Leonard of Port Maurice. This book is exactly what the title implies, sound advice for the healing of souls in the confessional. Saint Leonard was one of the great confessors of all time. He was a Franciscan and a missionary preacher.

Approbation of his Eminence Paul Cardinal Cullen
Excerpts from the encyclical letter Charitate Christi
1. Qualities of a good confessor: goodness, prudence, and knowledge
2. Goodness of life required
3-5. The same, continued
6. Dispositions required in aspirants to the sacred ministry:How confessors should act with them
7. Prudence necessary to confessors:How they ought to proceed quá judices
8. How they ought to proceed quá medici
9. Treatment of consuetudinarii and recidivi; Advantages of sometimes deferring absolution
10. The same subject continued: When are they to be considered as wanting in the due dispositions
11-14. Evils resulting from a too great readiness in absolvingconsuetudinarii and recidivi: Advantages of sometimes deferring absolution
15. Way for reconciling penitents to have their absolution delayed
16. Those in the voluntary proximate occasion of sin not to be absolved
17-19. In what consists the proximate occasion
20. Distinction between the voluntary proximate occasion of sin and the involuntary or necessary:How a confessor is to act with penitents of the latter sort
21-22. – How those in the voluntary proximate occasion of sin are to be dealt with
23. Rules prescribed by Monsignor Pie de Mirandola for the confessors of his diocese in dealing with penitents in the proximate occasion of sin contra castitatem
24. Proximate occasions of sins against the other virtues:Those arising from a penitent’s state of life, etc.
25. How confessors are to act with regard to those who are ignorant of the principal mysteries
26. The knowledge necessary for confessors
27. Confessors should know what sort of penances they ought to enjoin on the different classes of penitents
28. Various penances suggested
29. Circumstances in which the confessor might enjoin a light rather than a rigorous penance
30. The sigillum sacramentale
31. Concluding exhortation
Act of oblation to be made each morning
Indulgenced prayer to be said before hearing confessions.

Blessed [sic] Leonard of Port Maurice, in Italy, was a distinguished missionary in the last [i.e. nineteenth] century, who gained many souls to God by his preaching and his writings. His works were published in Rome in thirteen volumes in 1853, and duly approved. The treatise now published in English, and entitled Counsels to Confessors, has been always considered to be a most useful and valuable guide in the administration of the sacrament of penance. As I have been informed that the translation, which has been made by a skillful theologian, faithfully expresses the opinions and feelings of the holy author, I am happy to recommend it to those who have the direction of the consciences of others, hoping that they will derive light and instruction from the words of a most holy and zealous laborer in the vineyard of the Lord.
✞ Paul Card. Cullen,
Archbishop of Dublin. 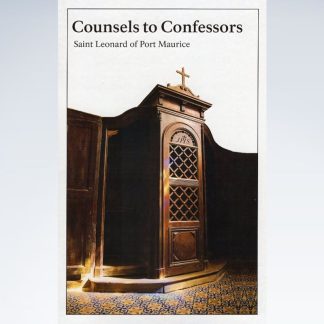 You're viewing: Counsels to Confessors, by Saint Leonard of Port Maurice US$ 10.00
Add to cart