Golden Arrow: The Revelations of Sr. Mary of St. Peter

The Life & Revelations of Sr. Mary of St. Peter (1816-1848) on Devotion to the Holy Face of Jesus. At Tours, France, she received this devotion from Our Lord. Approved worldwide. Imprimatur. Paperback, 256 pages.

Send Inquiry for Golden Arrow: The Revelations of Sr. Mary of St. Peter

Golden Arrow: The Life & Revelations of Sr. Mary of St. Peter (1816-1848) on Devotion to the Holy Face of Jesus. Sister Mary of St. Peter was a nun and autobiographer of the nineteenth century. During her time spent in the religious life, she personally received a powerful devotion to the Holy Face of Jesus, as well as a unique prayer of reparation known as the Golden Arrow Prayer . Her autobiography and revelations, as edited by Dorothy Scallan, were published as The Golden Arrow in 1954 by The William Frederick Press, New York, with the Nihil Obstat and Imprimatur.

IN TOURS, FRANCE, during the 1840’s a young Carmelite nun received a series of revelations from Our Lord about powerful devotion He wished to be established worldwide—the devotion to His Holy Face. The express purpose of this devotion was to make reparation for the blasphemies and outrages of “Revolutionary men” (the Communists)—through whom God is allowing the world to be chastised for its unbelief—as well as for the blasphemies of atheists and freethinkers and others, plus, for blasphemy and the profanation of Sundays by Christians. Specifically, this devotion is the divine tool given by God to defeat Communism, but it is also an instrument given to the individual devotee as a seemingly unfailing method of appealing to God in prayer—through adoration of His Holy Face and Name.Our Lord gave Sister Mary a short but powerful prayer called “The Golden Arrow,” by which a person can “shoot directly into the Heart of God” to heal the wounds inflicted on it by the malice of sinners.

Of the nine promises connected with this devotion, the first three are: 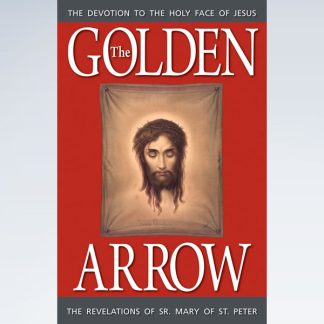 You're viewing: Golden Arrow: The Revelations of Sr. Mary of St. Peter US$ 20.00
Add to cart