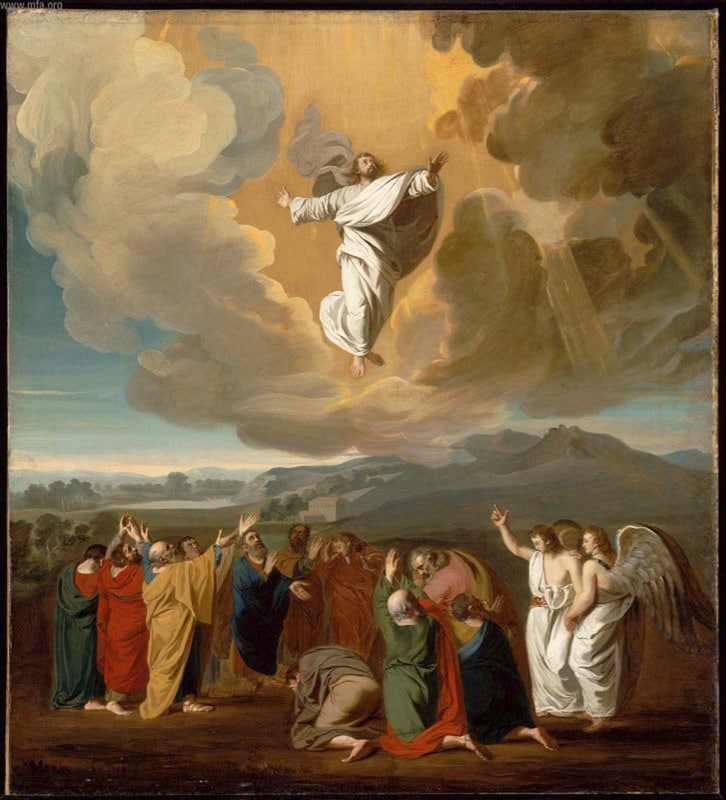 According to the Roman Catholic Liturgical Calendar, the Ascension Day is celebrated on a Thursday, the fortieth day of Easter. Every parish priest celebrates Mass for the people of his parish.

Pentecost Sunday is not far behind. Coming 50 days after Easter, and ten days after the Ascension of Our Lord, Pentecost marks the descent of the Holy Spirit on the apostles.

Pray NOVENA to the HOLY GHOST – (nine days before the feast of Pentecost).

On The Ascension of Our Lord by the very Rev. Dom Prosper Guéranger, Abbot of Solesmes

Consider first, that our Lord, after having employed forty days upon earth, to comfort and encourage his disciples, to confirm them in the faith of his resurrection, and to instruct them in the mysteries of his kingdom, on the fortieth day taking them out with him to Mount Olivet, lifted up his hands and gave them his blessing, and so ascended up visibly to heaven before their eyes, till a cloud interposed and took him out of their sight.

Bow thyself down, my soul, to receive with joy and gratitude this blessing of thy Saviour ascending now to his Father and to thy Father: follow him in spirit, and contemplate the triumphs and joy of all the heavenly legions that come out to meet him, and attend him to his Father’s throne; see how he brings along with him all the patriarchs, prophets, and spirits of the just, into those regions of eternal bliss, and presents them to his Father as the first fruits of his purchase, which he had made upon earth with his precious blood.

See with joy thy human nature, in the person of thy Lord, raised above all the Cherubim and Seraphim, and seated at the right hand of God; and exercise thyself upon this occasion in acts of love, in the way of congratulation and of rejoicing at the exaltation and triumphs of thy Saviour.

Consider 2ndly, that our Lord, by his ascension, has taken possession of the kingdom of heaven, not only for himself but also for us. He purchased this kingdom for us with his own blood, he opened the gates of it by his death, he showed us the way to it by his resurrection; and by his ascension he has given us as it were an earnest of our coming one day there to reign with him.

He is our head, we are his members; it is but natural that where the head is there the members should also he; it would be unnatural – it would be keeping them in a state of violence – to keep them separate from their head.

What comfort, then, to Christian souls to see their head, by this mystery of his ascension unto heaven, raised to the highest seat in that eternal kingdom, in order to draw them thither after him, and in the mean time preparing a place for them there, that he may in proper time come and ‘take them to himself; that where he is they also may be!’ – St. John xiv.

Consider 3rdly, what further motives we have for rejoicing in the ascension of our Lord when we reflect that he has entered into heaven in quality of our parent, of our friend, of out advocate and mediator, of our high priest, &c.

O what encouragements are here to raise our hopes! We have a tender father in heaven, the true parent of our souls, who has also power in the court of heaven, and takes exceedingly to heart our true interest; we have there, in the person of our redeemer, a most affectionate friend, who loves us with an incomparable love; we have a most faithful mediator and advocate, who ever pleads for us with the powerful eloquence of his sacred wounds, which he continually presents to his Father in our behalf; we have a high priest who, to make atonement for us, has carried into this heavenly sanctuary, not the blood of oxen or of goats, but his own most sacred blood, shed for obtaining for us an everlasting redemption.

O see, my soul, upon how many accounts thou oughtest to rejoice on the festival of the ascension of our Lord if thou either lovest him or thyself. Conclude to consider this festival of the ascension of our Lord as one of the principal solemnities of the year. The church of God considers it as such, and therefore daily commemorates in a particular manner, in the most sacred mysteries, not only the passion and resurrection but also the ascension of our heavenly spouse, as the mystery which put the last seal as it were to the great work of our redemption, and placed this flesh of ours in heaven, even at the right hand of the Father, which, at the fall of our first parents, had been sentenced to return to its original earth.

The above text comes from the Liturgical Year 15 Volume Set, By Dom Gueranger available from the Virgo Sacrata. Dom Guéranger, abbot of Solesmes from 1837-1875, was one of the leading monastics and liturgists of his generation, and his writings were highly influential both in France and abroad.