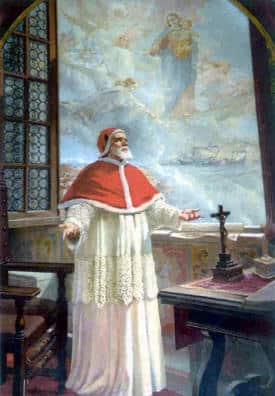 Consueverunt Romani Pontifices is a papal bull by Pope Pius V issued on September 17th, 1569 on the power of the Holy rosary, even before the great Catholic victory at the Battle of Lepanto in 1571. The darkness of heresy began to be dispelled, and the light of the Catholic Faith to be revealed.

The Roman Pontiffs and the other Holy Fathers, our predecessors, when they were pressed in upon by temporal or spiritual wars, or troubled by other trials, in order that they might more easily escape from these, and having achieved tranquillity, might quietly and fervently be free to devote themselves to God, were wont to implore the divine assistance, through supplications or litanies to call forth the support of the saints, and with David to lift up their eyes unto the Mountains, trusting with firm hope that thence would they receive aid.

1. Prompted by their example, and, as is piously believed, by the Holy Ghost, the inspired Blessed founder of the Order of Friars Preachers (whose institutes and rule we ourselves expressly professed when we were in minor orders), in circumstances similar to those in which we now find ourselves, when parts of France and of Italy were unhappily troubled by the heresy of the Albigenses, which blinded so many of the worldly that they were raging most savagely against the priests of the Lord and the clergy, raised his eyes up unto heaven, unto that mountain of the glorious Virgin Mary, loving Mother of God.

For she by her seed has crushed the head of the twisted serpent, and has alone destroyed all heresies, and by the blessed fruit of her womb has saved a world condemned by the fall of our first parents. From her, without human hand, was that stone cut, which, struck by wood, poured forth the abundantly flowing waters of graces.

And so Dominic looked to that simple way of praying and beseeching God, accessible to all and wholly pious, which is called the Rosary, or Psalter of the Blessed Virgin Mary, in which the same most Blessed Virgin is venerated by the angelic greeting repeated one hundred and fifty times, that is, according to the number of the Davidic Psalter, and by the Lord’s Prayer with each decade. Interposed with these prayers are certain meditations showing forth the entire life of Our Lord Jesus Christ, thus completing the method of prayer devised by the Fathers of the Holy Roman Church.

This same method St. Dominic propagated, and it was spread by the Friars of Blessed Dominic, namely, of the aforementioned Order, and accepted by not a few of the people. Christ’s faithful, inflamed by these prayers, began immediately to be changed into new men.

The darkness of heresy began to be dispelled, and the light of the Catholic Faith to be revealed. Sodalities for this form of prayer began to be instituted in many places by the Friars of the same Order, legitimately deputed to this work by their superiors, and confreres began to be enrolled together.

2. Following the example of our predecessors, seeing that the Church Militant, which God has placed in our hands, in these our times is tossed this way and that by so many heresies, and is grievously troubled and afflicted by so many wars, and by the depraved morals of men, we also raise our eyes, weeping but full of hope, unto that same mountain, whence every aid comes forth, and we encourage and admonish each member of Christ’s faithful to do likewise in the Lord.

[Pius goes on to confirm the indults, indulgences, etc., which his predecessors had granted to those who pray the Rosary, and to explicitate several of these indulgences.]

Given at Rome at St. Peter’s, under the Fisherman’s Ring, 17 September 1569, in the fourth year of Our Pontificate.