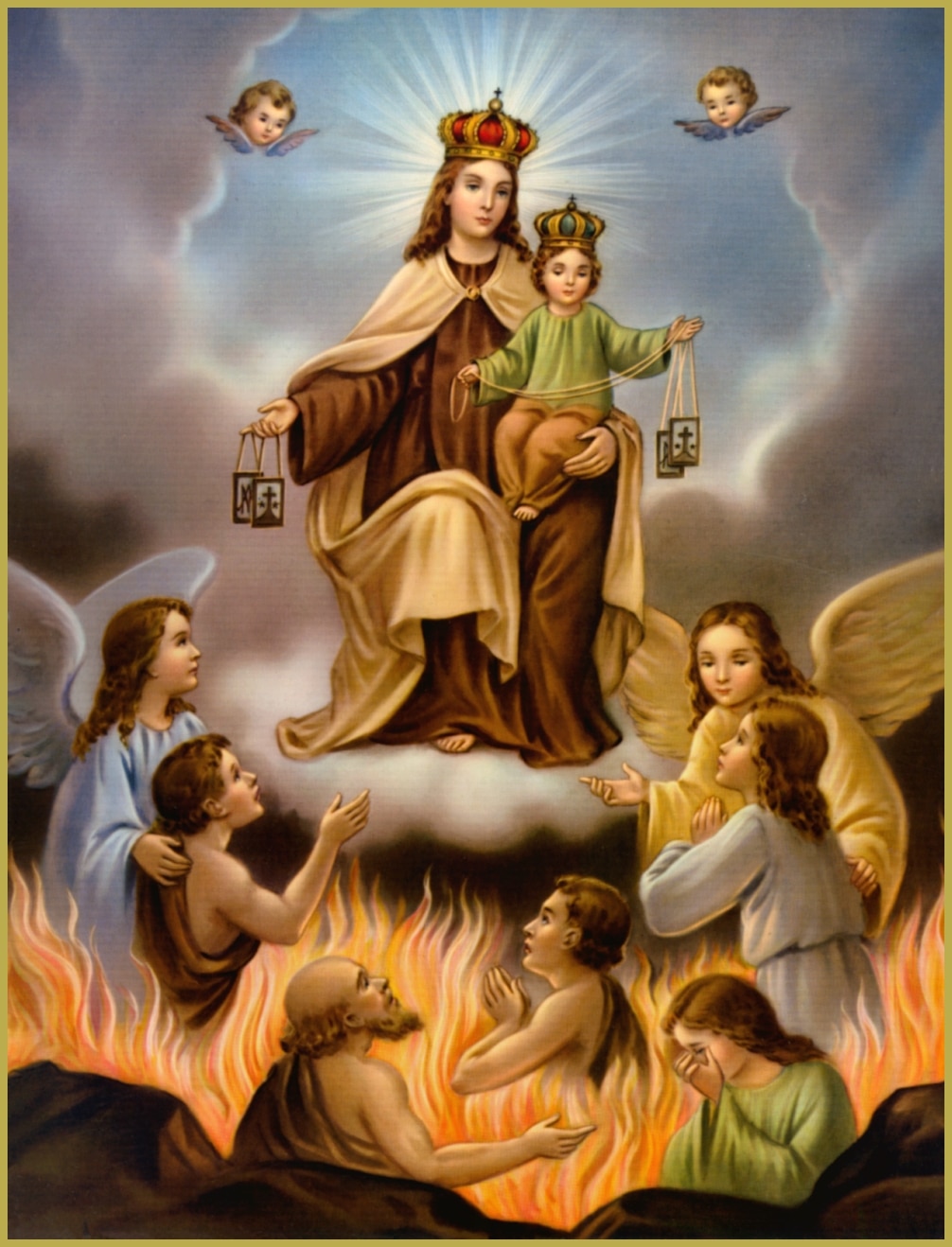 OUR LADY’S GARMENT — The Brown Scapular, the Most Powerful Sacramental

“Whosoever dies clothed in this Scapular shall not suffer eternal fire.” – words of Our Lady to Saint Simon Stock

Such is the extraordinary promise Our Lady makes to those who wear Her Brown Scapular. And this wonderful promise makes the Scapular the most powerful sacramental Heaven’s mercy has given us.

Who could doubt Our Lady’s promise, or be so foolish as not to wear, with profoundest gratitude and reverence, this abbreviated form of the Carmelite Mantle?

This garment of grace — two simple pieces of brown wool worn over the shoulders — is a tangible sign of the Blessed Mother ́s love and protection for Her devotees. We should kiss the Scapular devoutly when rising in the morning, and every time we put on a new Scapular to replace one that is worn or damaged. For this gesture of reverence, we receive an indulgence of 500 days, and we are also reminded to ask Our Lady: “Preserve me this day from sin and the occasions of sin.”

The Scapular also represents Our Lady’s protection and Her care for us. She promised to Saint Simon Stock: “It shall be a sign of salvation, a protection in danger, and a pledge of peace. Whosoever dies wearing this Scapular shall not suffer eternal fire.” As you will see in the various miracles of the Brown Scapular, beginning on page 8, through the centuries Our Lady has kept this promise.

The Scapular worn by laity is two pieces of brown wool joined by ribbon, string, cord or chain. It is Our Lady’s garment. And by putting on the Scapular we place ourselves under Her Mantle.

Our Lady held out the Scapular to us at Fatima, wanting us all to wear it and to offer it to others.

Saint Alphonsus tells us: “Modern heretics make a mockery of wearing the Scapular. They decry it as so much trifling nonsense.” Yet we know that many of the Popes have approved and recommended it.

Two great founders of Religious Orders, Saint Alphonsus of the Redemptorists and Saint John Bosco of the Salesians, were devoted to Our Lady of Mount Carmel and both wore Her Brown Scapular. When they died, each was buried in his priestly vestments and Scapular. Many years later, their graves were opened, the bodies and sacred vestments in which they were buried were dust. BUT THE BROWN SCAPULAR WHICH EACH WAS WEARING WAS PERFECTLY INTACT. The Scapular of Saint Alphonsus is displayed in his Monastery in Rome.

MIRACLES OF THE BROWN SCAPULAR

The devotion to the Brown Scapular was authorized by miracles. God uses miracles as a witness to the truth of His promises and those of His Mother. Miracles are used by God to confirm the solid foundation of the devotions that the Church proposes to the faithful. The greater the number of miracles obtained by a particular devotion, the more it draws our attention to this devotion and authenticates the truth that the practice is pleasing to God. Of all the devotions adopted by the Church, none has been confirmed by more authenticated miracles than that of the Brown Scapular. What follows is a small sampling.

A priest relates that one day in a town near Chicago he was called to the bedside of a man who had been away from the Sacraments for many years. “The man did not want to see me: he would not talk. Then I asked him to look at the little Scapular I was holding. ‘Will you wear this if I put it on you? I ask nothing more.’ He agreed to wear it, and within the hour he wanted to go to Confession and make his peace with God. This did not surprise me, because for over 700 years Our Lady has been working in this way through Her Scapular.” On the very day that Our Lady gave the Scapular to Saint Simon Stock, he was hurriedly called by Lord Peter of Linton: “Come quickly, Father, my brother is dying in despair!” Saint Simon Stock left at once for the bedside of the dying man. Upon arrival, he placed his large Scapular over the man, asking Our Blessed Mother to keep Her promise. Immediately the man repented, and died in the grace of God. That night the dead man appeared to his brother and said, “I have been saved through the most powerful Queen and the habit of that man as a shield.”

Saved from the Sea

Another Scapular miracle took place in 1845. In the late summer of that year, the English ship, “King of the Ocean”, on its way to Australia, not far from Cape Hope, found itself in the middle of a hurricane. As wind and sea mercilessly lashed the ship, a Protestant minister, with his wife and children and other passengers, struggled to the deck to pray for mercy and forgiveness, as the end seemed at hand. Among the crew was a young Irishman, John McAuliffe. On seeing the urgency of the situation, the youth opened his shirt, took off his Scapular, and, making the Sign of the Cross with it over the raging waves, tossed it into the ocean. At that very moment, the wind calmed. Only one more wave washed the deck, bringing with it the Scapular which came to rest at the young man’s feet. All the while the minister (a Mr. Fisher) had been carefully observing McAuliffe’s actions and the miraculous effect of those actions. Upon questioning the young man, he was told about the Holy Virgin and Her Scapular. Mr. Fisher and his family became determined to enter the Catholic Church as soon as possible, and thereby enjoy the same protection of Our Lady’s Scapular. This they did shortly after landing in Australia.

If the Brown Scapular becomes worn out or torn, it must be disposed with reverence by burning it or burying it in the ground.

As soon as possible, one must replace a Scapular where even one string or cord has been cut or torn away from the Scapular. Each string or cord must be one continuous piece of material connecting the two pieces of brown wool, with no interruption in the material or string.

Only the first Scapular used for enrollment must be blessed by the priest doing the enrollment. Once enrolled, replacement Scapulars do not need to be blessed because the blessing as well as the enrollment are attached to the enrollee for life. However, there is no harm in having a priest bless the new Scapular.

ENROLLMENT (INVESTITURE) IN THE CONFRATERNITY OF THE BROWN SCAPULAR

In order to receive Our Lady’s Scapular promise: “Whosoever dies clothed in this garment shall not suffer eternal fire,” Holy Mother Church teaches a Catholic must be invested (enrolled) in the Confraternity of the Brown Scapular by a Catholic priest.

When a person is invested in the Brown Scapular, the priest will bless the Scapular first. Then the priest places the Scapular over the person’s head and onto the enrollee’s shoulders, so a piece of the brown wool cloth rests in the front and a piece rests in the back. While placing the Scapular on the person, the priest says the following words: “Receive this blessed Scapular, and ask the Most Holy Virgin…” (see page 31 for the rest of the words). Wear the Brown Scapular at all times, even during daily personal care.

This article comes from “Our Lady’s Garment“, a 31-page booklet, published by the Fatima Center.