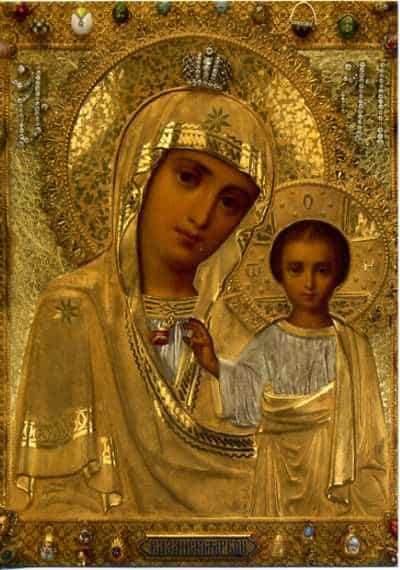 “O fervent intercessor, Mother of the Lord Most High, thou dost pray to thy Son Christ our God and saves all who seek they protection. O Sovereign Lady and Queen, help and defend all of us who in trouble and trials, in pain and burdened with sins, stand in thy presence before thine icon, and who pray with compunction, contrition and tears and with unflagging hope in thee. Grant what is good for us, deliverance from evil, and save us all, O Virgin Mother of God, for thou art a divine protection to thy servants.” Troparion, Tone 4.

Painted in Kazan, Russia, circa 1300 A.D., the highly venerated and most magnificent of all Russian Icons, The Virgin of Kazan of which this is a true color reproduction, was enshrined in 1630 A.D. in the then new Kazan Cathedral in Moscow which was built to receive it in commemoration of the part it played in Prince Pozharski’s 1612 A.D. defeat of the Poles who had overrun Russia and were entrenched in Moscow.

Except for occasional removals from the Cathedral for religious services — its unauthorized removal by the military to the battle lines for veneration by the Russian troops which led to the defeat of Napoleon and the rout of the French from Moscow being one of the more noted — this miracle Icon of Russia remained in the Cathedral in the place of honor on the ikonostas, to the left of the Royal Doors, when, following the Bolshevik Revolution of 1917 A.D., the Icon fell into private hands along with many other famous religious and art treasures which were sold by the Bolsheviks to raise funds to finance the revolution.

The Rizza, covering the entire Icon except for the heads of the Virgin and Child, contains over a thousand jewels contributed by the faithful in thanksgiving for favors granted, particularly cures relating to eyesight with which the emeralds are associated, is as exquisite in its workmanship and detail as the painting and was made circa 1600 A.D. (October 1963 John I. Hennessy)

“The whole teaching of the Latin Fathers may be found in the East, just as the whole teaching of the Greek Fathers may be found in the West. Rome has given St. Jerome to Palestine. The East has given Cassian to the West and holds in special veneration that Roman of the Romans, Pope Gregory the Great. St. Basil would have acknowledged St. Benedict of Nursia as his brother and heir. St. Macrina would have found her sister in St Scholastica. St. Alexis the “man of God,” “the poor man under the stairs,” has been succeeded by the wandering beggar, St. Benedict Labre. St. Nicolas would have felt as very near to him the burning charity of St. Francis of Assisi and St. Vincent de Paul. St. Seraphim of Sarov would have seen the desert blooming under Father Charles de Foucauld’s feet, and would have called St. Thérèse of Lisieux “my joy.” (Fr Lev Gillet 1893 – 1980 was an archimandrite of the Eastern Orthodox Church. Brought up in the Roman Catholic tradition, he joined the Orthodox Church in 1928 and worked for the union of the churches.)