On Divine Tradition is one of the most important theological texts dealing with the notion of Tradition in the Church. By Cardinal Franzelin, Peritus at the First Vatican Council — With an Introduction by Fr. Chad Ripperger, PhD. Hardcover, 6″ x 9″, 469 pages.

On Divine Tradition is one of the most important theological texts dealing with the notion of Tradition in the Church. By Cardinal Franzelin, Peritus at the First Vatican Council — Translated by Ryan Grant — With an Introduction by Fr. Chad Ripperger, PhD.

Cardinal Franzelin was a peritus at the First Vatican Council, and was made a Cardinal by Bl. Pope Pius IX. He was also an expert in Hebrew and a lecturer in Chaldean and Syriac. His lectures and theological writings held first place in the Roman Theological scene of his day. In 26 Theses, Cardinal Franzelin challenges the Protestant notion that Tradition is opposed to Scripture, by a direct analysis of the establishment of a living magisterium in Scripture, and the witness to this magisterium given by the Fathers of the Church and all Christian ages.

Unlike other authors who wrote very well on the subject but tailored it to the issues of their day, such as Melchior Cano and St. Robert Bellarmine, Cardinal Franzelin wrote a treatise considering tradition in itself, and then applied the fruit of this discussion to refute the Protestant notion that Tradition is opposed to Scripture.

Thus, in 26 Theses, Franzelin explains for us the notion of Tradition, where we seen tradition in history; how Scripture is also a witness to it; that Christ founded a living magisterium of witnesses to guide His Church; what is infallibility and how do we see it exercised; what are the monuments; what is the authority of the Fathers of the Church as well as the Theologians? What do we make of St. Vincent of Lérin’s definition, always, everywhere and by all?

Questions such as these, are treated in depth in a serious theological study considered to be classical in theological studies, which set the discussion for every other writer on the topic, even after Vatican II. Hitherto locked away in Latin, Ryan Grant (Director of the Bellarmine Translation Project) has rendered them into a good, readable English while preserving the scholastic and Thomistic language of the original, having given a great contribution to Theology which for too long has been impoverished on account of being cut off from its Latin patrimony.

“The fact that even after Vatican II authors repeatedly referred to Franzelin meant that the work of Franzelin himself must be studied in depth in order to make any claim that one has done the proper research to speak with any authority on the topic of Tradition.” -Fr. Chad Ripperger, PhD.

Check other books on Divine Tradition available from VIRGO SACRATA. 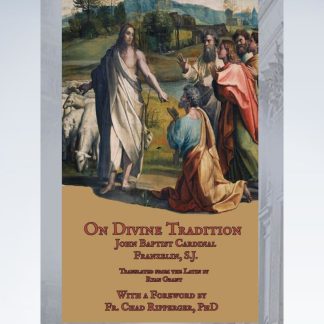 You're viewing: On Divine Tradition: De Divina Traditione US$ 60.00
Add to cart