The Mystical City of God (Set of 4 Books)

Mystical City of God is a book written in the 17th century by the Franciscan nun Venerable Mary of Jesus of Ágreda about the life of Our Lady and the divine plan for creation and the salvation of souls. Beautiful hardcover binding with elegant gold-foil details.

The Mystical City of God is an amazing collection of four books of revelations about the life of Our Lady and the divine plan for creation and the salvation of souls that has been enthralling readers for centuries. Dictated to Venerable Mary of Agreda (1602-1665) by the Blessed Mother herself. This magnificent set is an heirloom that should be in every Catholic home library.

Sr. Mary of Agreda was a Franciscan abbess and spiritual writer from Spain. She was a noted mystic and prolific writer who authored many books. Reports of her bilocation between Spain and the US (New Mexico and Texas) have been retold for centuries and inspired generations of Franciscan missionaries in the New World.

This book is composed of four volumes that summarize the life of Our Lady: the Conception, Incarnation, Transfixion and Coronation. This magnificent narrative takes the reader through the various stages of the life of the Blessed Mother while revealing all sorts of interesting facts about salvation history.

Beautiful hardcover binding with elegant gold-foil details. The Mystical City of God interior is reproduced at 100% of the size in the original book and is printed from the original negatives for complete fidelity.

“My daughter, the Savior and I have taught the way of humility, of contempt and tribulation. This is the royal road, on which we first walked, and of which We have set Ourselves up as Teachers. We are the Protectors of all the afflicted and ill-used, ready to assist by miraculous and especial favors all those who call upon Us in their necessities. Of this assistance and protection the followers of this world and its vain pleasures deprive themselves, since they hate the way of the Cross. To the Cross thou wast called and invited, and on account of it thou art favored with the sweetness of my loving guidance. Follow me and labor to imitate me, since thou hast found the secret treasure (Matth. 12, 44) and the precious pearl, for the possession of which thou must despise all that is earthly and give up all human freedom in so far as it is contrary to the pleasure of my most exalted Lord.”  — Our Lady to Ven. Mary of Agreda, Mystical City of God.

About the Author: Venerable Mother Mary of Jesus of Agreda, also known as the Blue Nun, was born in 1602 at Agreda, Spain. She possessed a considerable amount of divine knowledge even at a very young age, and consequently was confirmed at just four years old. When she was twenty-five, Mary was instituted as president of a Franciscan nunnery that her mother left behind after the older woman s death. She wrote fourteen books throughout her lifetime, among them the four-volume Mystical City of God, and also served as spiritual advisor to King Philip IV of Spain. It has also been said that her writings were inspirational for Mel Gibson as he produced his film The Passion of the Christ, released in 2004. Mother Mary of Jesus died in 1665 at the age of sixty-three, and less than ten years later was declared venerable by Pope Clement X. 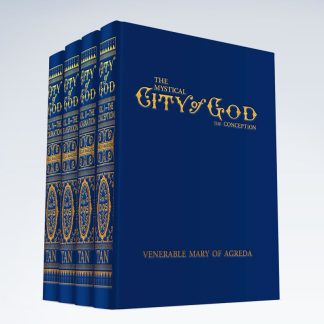