The Angels: In Catholic Teaching and Tradition

Send Inquiry for The Angels: In Catholic Teaching and Tradition

In “The Angels: In Catholic Teaching and Tradition” Father Pascal Parente compiles nearly everything that is known with certainty about the angels. Drawing heavily from Tradition and Doctors and Fathers of the Church.  Parente explains the angels’ creation, intelligence, free will, language, powers, movements, number and particular duties. He also relates the history of devotion to the holy angels and discloses the little-known fact that there are guardian angels, not only of individuals, but of churches, dioceses, and nations!In a world that is increasingly curious about spiritual beings and at the same time skeptical about the existence and power of those beings, The Angels is a crucial tool for distinguishing the true from the false and the known from the unknown. It is a sure guide through the unseen and holy world of the angelic spirits—a book that truly instructs and inspires us to live in the presence of the Holy Angels!

“See that you despise not one of these little ones: for I say to you, that their angels in heaven always see the face of my father who is in heaven.” – Matthew, 18:10

About the Author
Father Pascale Parente, Ph.D., S.T.D. and J.C.B., was a scholar, professor and author. He held a long-standing reputation on being the foremost authority on ascetical and mystical theology in the United States. He also served as professor at the Catholic University of America in addition to dean at the School at Sacred Theology. Father Parente’s works are profound and expressed in simple, everyday language. 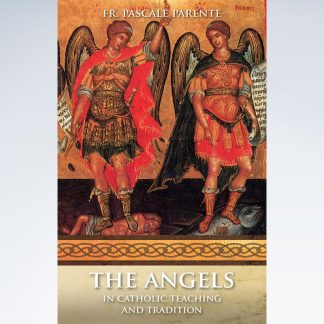 You're viewing: The Angels: In Catholic Teaching and Tradition US$ 20.00
Add to cart