Traditional Roman Hymnal for use in churches. This book contains hymns, responses, Gregorian chants, and ceremonies of the Traditional liturgy.

After several years of work, we are pleased to announce the arrival of the long-awaited second edition of The Traditional Roman Hymnal.  Perfect for use in churches, it contains hymns, responses, Gregorian chants, and ceremonies of the Traditional liturgy.

The Liturgical Year is covered with hymns and chants proper to Advent, Christmas, Epiphany, Lent, Easter and Pentecost. Other sections include music in honor of the Holy Trinity, Our Lord, the Sacred Heart, the Blessed Sacrament, Our Lady, Angels, Saints, and Holy Souls. Includes as well Gregorian Chant notation for many Masses.

As promised, the second edition is greatly improved. This new edition contains over 360 chants and hymns (50% more than the first edition), with the harmonizations brought into conformity with what is commonly in use. We have also made vast improvements to the organization of the materials.

Traditional Roman Hymnal contains all the most commonly-used chants and hymns in traditional communities:

The second edition contains several indices to make this one of the easiest hymnals to use. We’ve included an index for Titles, Authors, Translators, and Composers, and even included a compatibility index to the first edition hymnal.
456 pp. Hardcover with durable sewn binding. 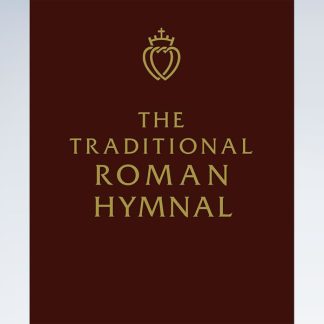 You're viewing: The Traditional Roman Hymnal – Pew Edition US$ 39.00
Add to cart