An invaluable reference for the clergy, music directors, choir members, organists, masters of ceremonies, and those who have a general interest in the sacred liturgy of the Latin Rite. Saddle-stitched softcover, 124 pages.

Sacred Music and Liturgy is an invaluable reference guide for the clergy, music directors, choir members, organists, masters of ceremonies, and those who have a general interest in the sacred liturgy of the Latin Rite.

The Instruction of the Sacred Congregation of Rites concerning Sacred Music and Sacred Liturgy in accordance with the Encyclical Letters of Pope Pius XII Musicae Sacrae Disciplina and Mediator Dei.

This 1958 Instruction (entitled in Latin De Sacra Musica et Sacra Liturgia) is an important reference and resource that explains general liturgical notions, the rules for sacred music and active participation for the traditional Roman Liturgy [see the images above for the Table of Contents].

As further explained in its Introduction:

“it seems a very opportune moment to gather together from the above-mentioned documents [listed in the subtitle, and including Tra le Sollecitudini and Divini Cultus] and epitomize in a special Instruction the chief points that concern the sacred Liturgy and sacred music and their pastoral efficacy, that so the teaching of these documents may be more easily and correctly set forth and may in fact be put into practice.”

Another important aspect of this document is that:

“It was prepared by order of the late Holy Father [Pope Pius XII], who himself read it twice carefully and add some annotations. He then confirmed it in every detail by his authority speciali modo, and ordered it to be promulgated and carefully observed by all whom it concerns. The Instruction was the last act of the great Pope for the Liturgy on behalf of the liturgical movement.”

This edition of the Instruction also uniquely features the commentaries of the Canon J.B. O’Connell (an excellent liturgist known primarily for his rubrical works), which provide important contextual background to the document’s publication and its contents.

An invaluable reference for the clergy, music directors, choir members, organists, masters of ceremonies, and those who have a general interest in the sacred liturgy of the Latin Rite.

Sacred Music and Liturgy translated with an Introduction and Commentary by J.B. O’Connell. Saddle-stitched softcover, 124 pages. 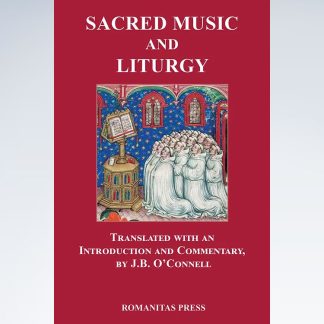 You're viewing: Sacred Music and Liturgy US$ 17.00
Add to cart