Considered by some scholars to be the most approachable Virgin Mary sculpture, this replica of Michelangelo’s elegant 15th-century sculpture embodies the High Renaissance. Ships within the U.S only.
Size: 10½”Wx12″Dx28″H
Weight: 15 lbs

Madonna of Bruges Garden Statue is a sculpture by Michelangelo of Mary with the infant Jesus. By artist Michelangelo Buonarrotti (1475-1564), in the Church of Our Lady, Bruges, Belgium. Michelangelo’s depiction of the Madonna and Child differs significantly from earlier representations of the same subject, which tended to feature a pious Virgin smiling down on an infant held in her arms. Instead, Jesus stands upright, almost unsupported, only loosely restrained by Mary’s left hand, and appears to be about to step away from his mother and into the world. Meanwhile, Mary does not cling to her son or even look at him, but gazes down and away, as if she knows already what is to be her son’s fate. It is believed the work was originally intended for an altar piece. If this is so, then it would have been displayed facing slightly to the right and looking down.

Madonna of Bruges statue is cast in quality designer resin, – this enthroned Madonna creates a spiritual sanctuary nestled beneath your favorite tree, or awarded a place of honor in a spot for indoor meditation. 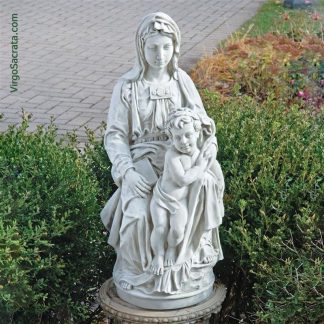