Our Lady of Fatima Statue 32″

At nearly three feet tall, Our Lady of Fatima Statue will be the crowning glory of any sacred spot in home or garden. Ships within the U.S only.
Size: 12″W x 14″D x 32″H.
Weight: 9 lbs.

Send Inquiry for Our Lady of Fatima Statue 32″

Our Lady of Fatima Statue, at nearly three feet tall, this awe-inspiring exclusive replicates the legendary vision that appeared to three shepherd children at Fatima, Portugal in 1917. From the rosary to the upturned eyes of the faithful ones, its master sculptor ensures that this quality designer resin work will be the crowning glory of any sacred spot in home or garden.

Our Lady of Fátima (formally known as Our Lady of the Holy Rosary of Fatima) is a Roman Catholic title of the Blessed Virgin Mary based on apparitions reported to have been experienced by three shepherd children at Fátima. The three children were Lúcia Santos and her cousins Jacinta and Francisco Marto.

Many Roman Catholics recite prayers based on Our Lady of Fatima. Lúcia said that the Lady emphasized Acts of Reparation and prayers to console Jesus for the sins of the world. Lúcia said that Mary’s words were, “When you make some sacrifice, say ‘O Jesus, it is for your love, for the conversion of sinners, and in reparation for sins committed against the Immaculate Heart of Mary.” At the first apparition, Lúcia wrote, the children were so moved by the radiance they perceived that they involuntarily said “Most Holy Trinity, I adore you! My God, my God, I love you in the Most Blessed Sacrament.” Lúcia also said that she heard Mary ask for these words to be added to the Rosary after the Gloria Patri prayer: “O my Jesus, pardon us, save us from the fires of hell. Lead all souls to heaven, especially those in most need.”

Several images of Our Lady of Fatima has merited various acclamations 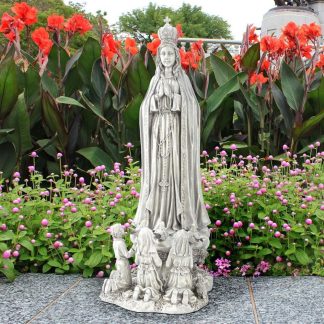