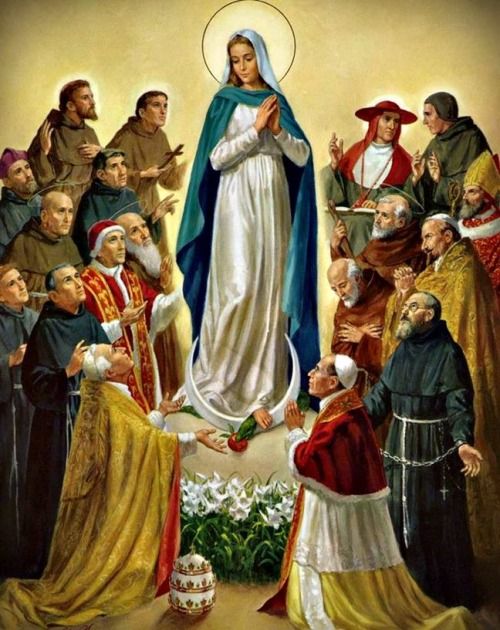 Our Lady, Mother of God, our Mother and Mother of the Church in recent centuries, has given us warnings on the tremendous crisis that the Church would suffer from the mid-Twentieth Century and beyond.

She uses words that are precise and unambiguous, though tragic and terrible in its contents.

In her appearance at La Salette, Our Lady was displeased with the conduct of the Ministers of God for their “evil life” for their “love of money, honors and pleasures”, but most especially for their “irreverence and impiety in celebrating the Holy Mysteries”.

She already knows the reality of the betrayal of so many ministers of God who, having thrown themselves into the arms of the infamous Sect of Freemasonry, do not worship the true God, but worship only themselves:

“Tremble… you who proclaim to worship Jesus Christ, but on the inside, worship only yourself …”.

She also knows that this betrayal will destroy the Faith in Rome and the Church:

“Rome will lose the Faith and become the seat of the Antichrist!… The Church will be eclipsed”.

And She does not ignore the fact that the Beast and his subjects, proclaiming themselves saviors of the world, and shall deceive many, will attempt to rise to the heavens, until they will be thrown forever into the depths of hell!

In her apparitions of Fatima, Our Lady confirmed what she had said at La Salette, and the punishment that will fall on the entire human race “within the second half of the Twentieth Century”; both tell of the “horrible crisis” in which the Catholic Church will plunge.

She tells us that Satan will march amidst the rows of Cardinals and Bishops and, in Rome, there will be great changes, that Satan will reign in the highest places and will even infiltrate to the top of the Church!

But She also predicts that the rot in Rome will fall and never rise again! But in the meantime, the Church will be obscured and the world deranged by terror, will be taken in by errors made by the partisans of Satan, who for a while, will be able to reign over the world, until God will again be proclaimed and served as before.

There were, however, Apparitions (to Mother Mariana in Quito, from 1582 to 1634) in which the Virgin Mary, invoked under the name of Our Lady of Good Success, explicitly condemns Freemasonry using terms such as “the cursed sect of Freemasonry,” “Satan will reign completely through the Masonic sects,” “the terrible hordes of the Masonic sect”… which leave no doubt about the main cause of the “horrible crisis” facing the Church today, and Her new… Masonic course!

Our Lady of Good Success

Since the year 1582, Mother Mariana de Jesus Torres received many apparitions of the Most Blessed Trinity, Jesus and Mary in the Convent of the Immaculate Conception of Quito (Ecuador), until the final apparition which took place on December 8, 1634.

In these apparitions, Our Lady, who asked to be invoked under the title of Our Lady of Good Success, and Jesus revealed to Mother Mariana several messages referring to the period of the second half of the Twentieth Century.
During this period, the Church would suffer persecution in part by Freemasonry and a horrible notorious internal crisis caused by the betrayal of many ministers of God, who “would join the party of Satan, by becoming members of Masonic Lodges”. Our Lady showed to Mother Mariana the state of devastation of the Church “from the mid-Twentieth Century and beyond” as a punishment from God the Father for the corruption of humanity!

«Shortly after the mid-Twentieth Century, the passions will erupt and there will be a total corruption of customs for Satan will reign almost completely by means of the Masonic sect».

«The Sacrament of Matrimony, which symbolizes the union of Christ with His Church, will be attacked and deeply profaned. Freemasonry, which will then in power, will approve iniquitous laws with the aim of doing away with this Sacrament».

«Moreover, in these unhappy times, there will be unbridled lust …Innocence will almost no longer be found in children nor modesty in women. In this supreme moment of need of the Church, that one who should speak will fall silent».

«During this epoch, the Church will find Herself attacked by terrible hordes of the Masonic sect …The vices of impurity, of blasphemy and sacrilege will dominate, in these times of depraved desolation and that one who should speak will fall silent».

«The fury of the devil, in trying to raze the Catholic Church, would be served by Her children who would lose their faith.They would work to oppress the Church, and prevent public devotion for they would have already entered the party of Satan, by becoming members of Masonic Lodges… and the loathsome and pestiferous wild boar of Freemasonry would enter the beautiful and flourishing vineyard of the Church, leaving it in complete ruins and destroyed».

«The Masonic Sect will be so subtle as to penetrate into the heart of families in order to corrupt the children, and the Devil will pride himself in dining upon the exquisite delicacy of the hearts of children».

«Know that the Divine Justice sends terrible punishments on entire nations, not only for the sins of the people, but above all for the sins of Priests and Religious… Deviating from their sublime mission they will deteriorate to the point where that, in the eyes of God, they are the ones to accelerate the severity of punishment».

Our Lady of La Salette

On September 19, 1846, on the Mountain of La Salette, Our Lady appeared to Melanie and Maximin and gave them a Message that was later recognized by the Church, but a diabolical plot has continuously and deliberately mutilated and silenced it. In this long message, Our Lady spoke these words:

«The priests, ministers of My Son for their evil life, for their irreverence and their impiety in celebrating the Holy Mysteries, for the love of money, honors and pleasures, the priests have become cesspools of impurity. Yes, the priests ask for their revenge and revenge is suspended over their heads».

«Woe to the Princes of the Church who think only of piling riches, to protect their authority and dominate with pride».

«The Church will be abandoned to great persecutions, that one will be the time of darkness, and the Church will have a horrible crisis… ».

«Tremble, earth, and you who proclaim yourselves to worship Jesus Christ, but, on the inside, only worship yourselves, tremble, for God will hand you over to His enemy because the holy places are in the state of corruption…».

«ROME WILL LOSE THE FAITH AND BECOME THE SEAT OF THE ANTICHRISTS. «The Church will be eclipsed…».

«It’s time. The sun is darkening, Faith alone will survive! Now is the time, the abyss is opening. Here is the king of darkness, here is the Beast with his subjects, calling himself the Savior of the world. He will rise proudly into the air to go up to Heaven… ».

«Then water and fire will purge the earth and will consume all the works of men’s pride and all will be renewed:
God will be served and glorified».

Our Lady of Fatima

On October 13 th, 1917, after a series of apparitions, Our Lady appears for the last time to the children of Fatima: Lucia, Jacinta, and Francisco. After the advent of the “Miracle of the Sun”, the Mother of God revealed a special Message to Lucy ( also known as the “Third Secret of Fatima”) which, among other things she said:

«A great chastisement will fall on the entire human race; not today, not tomorrow, but in the second half of the Twentieth Century ».

«No longer does order reign anywhere, and Satan will reign over the highest places and directs the course of events. He (Satan) really will succeed in infiltrating to the top of the Church».

«Also for the Church a time of Her greatest trials will come. Cardinals will oppose Cardinals Bishops will oppose Bishops, and Satan will march amid their ranks, and in Rome great changes will occur. What is rotten will fall, and what will falls will never rise again. The Church will be darkened, and the world will be deranged by terror».

«A great war will break out within the second half of the Twentieth Century. Fire and smoke will fall from Heaven… the foam of the the oceans will rise up all overturning and sinking. Millions and millions of people will die by the hour And the survivors will envy the dead».

«Death will reign everywhere for the errors, committed by the foolish and by the partisans of Satan, who, then and only then, will reign over the world».

«At last, those who will survive all of these events will once more proclaim God and His Glory and will serve Him like before, when the world was not so corrupted».

These “Warnings from Our Lady” come as a summary from Msgr. Villa’s book “Paul VI beatified?“. This book is a must-read for every serious Catholic. Fr. Villa pulls no punches as he demonstrates that the new humanistic orientation of Paul VI is not only contrary to what was taught prior to Vatican II, but is also in perfect accord with the heretical principles of Freemasonry. The book clearly shows that Paul VI is more deserving of an anathema sit than beatification. Let us hope that the latest move of those prelates still drunk with the Conciliar wine, and who are engaged in what Fr. Villa called a “scheme to raise to the altars the two Popes of Vatican II, in order to manifest the ‘supernaturalness’ of Vatican II, and, consequently, this ‘New Church’, with its reforms” will be stopped in their tracks, once again, by this monumental work. And let us not forget to pray for Fr. Villa, who went to his eternal reward on November 18, 2012. (Catholic Family News Book Review.)

“How could a successor of Peter have caused in so short a time more damage to the Church than the Revolution of 1789?… the deepest and most excessive in Her history… what no heresiarch has ever succeeded in doing?… Do we really have a pope or an intruder sitting on the Chair of Peter?” (Marcel Lefebvre, commenting on Paul VI’s reign in 1976)