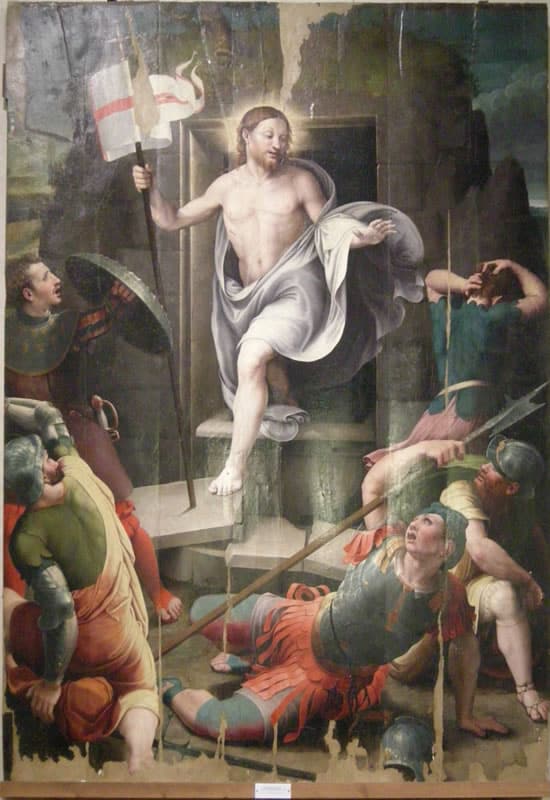 Victimae Paschali Laudes is one of the medieval sequences that were preserved in the Missale Romanum published in 1570 after the Council of Trent (1545-1563), this poetic liturgical hymn continues to be sung at the Tridentine Mass on Easter Sunday and through its Octave. The Easter sequence, attributed to Wipo of Burgundy (✞ 1048).

This ancient chant tells the story of death and life locked in a struggle, wherein Christ, the Paschal victim, victorious over death, reconciles us to the Father. It tells the story of Mary Magdalene, who upon finding the empty tomb of the risen Christ and of finding the clothes which once covered his head and limbs, proclaims “Christ my hope has arisen.”

* The section beginning “Credendum est,” with its pejorative reference to the Jews, was deleted in the 1570 missal, which also replaced “praecedet suos (his own)” with “praecedet vos (you)”, and added “Amen” and “Alleluia” to the end.

It was Cardinal Newman who said that to be deep in history is to cease to be protestant. 1955 encyclical Musicae Sacrae, Pius XII added: “It is the duty of all those to whom Christ the Lord has entrusted the task of guarding and dispensing the Church’s riches to preserve this precious treasure of Gregorian chant diligently and to impart it generously to the Christian people. … In the performance of the sacred liturgical rites this same Gregorian chant should be most widely used and great care should be taken that it be performed properly, worthily, and reverently.”