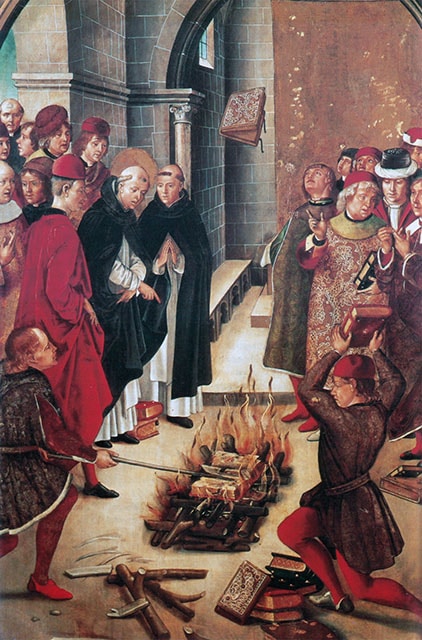 “A Christian to whom a Bible has been offered by a Protestant or an agent of the Protestants should reject it with disgust, because it is forbidden by the Church. If it was accepted by inadvertence, it must be burnt as soon as possible or handed in to the Parish Priest” (Catechism of Pius X).

“We were overcome with great and bitter sorrow when We learned that a pernicious plan, by no means the first, had been undertaken, whereby the most sacred books of the Bible are being spread everywhere in every vernacular tongue, with new interpretations which are contrary to the wholesome rules of the Church, and are skillfully turned into a distorted sense. For, from one of the versions of this sort already presented to Us we notice that such a danger exists against the sanctity of purer doctrine, so that the faithful might easily drink a deadly poison from those fountains from which they should drain ‘waters of saving wisdom’ [Ecclus. 15:3]…” (Pope Pius VII, 1816 A.D.)

“For you should have kept before your eyes the warnings which Our predecessors have constantly given, namely, that, if the sacred books are permitted everywhere without discrimination in the vulgar tongue, more damage will arise from this than advantage. Furthermore, the Roman Church, accepting only the Vulgate edition according to the well-known prescription of the Council of Trent, disapproves the versions in other tongues and permits only those which are edited with the explanations carefully chosen from writings of the Fathers and Catholic Doctors, so that so great a treasure may not be exposed to the corruptions of novelties, and so that the Church, spread throughout the world, may be ‘of one tongue and of the same speech’ [Gen. 11:1].” (Pope Pius VII, 1816 A.D.)

“Since in vernacular speech we notice very frequent interchanges, varieties, and changes, surely by an unrestrained license of Biblical versions that changelessness which is proper to the divine testimony would be utterly destroyed, and faith itself would waver, when, especially, from the meaning of one syllable sometimes an understanding about the truth of a dogma is formed. For this purpose, then, the heretics have been accustomed to make their low and base machinations, in order that by the publication of their vernacular Bibles, (of whose strange variety and discrepancy they, nevertheless, accuse one another and wrangle) they may, each one, treacherously insert their own errors wrapped in the more holy apparatus of divine speech. ‘For heresies are not born,’ St. Augustine used to say, ‘except when the true Scriptures are not well understood and when what is not well understood in them is rashly and boldly asserted.’ But, if we grieve that men renowned for piety and wisdom have, by no means rarely, failed in interpreting the Scriptures, what should we not fear if the Scriptures, translated into every vulgar tongue [i.e. the languages of the people] whatsoever, are freely handed on to be read by an inexperienced people who, for the most part, judge not with any skill but with a kind of rashness?…” (Pope Pius VII, 1816 A.D.)

“The wickedness of our enemies is progressing to such a degree that, besides the flood of pernicious books hostile in themselves to religion, they are endeavoring to turn to the harm of religion even the Sacred Literature given to us by divine Providence for the progress of religion itself. It is not unknown to you, Venerable Brethren, that a certain ‘Society,’ commonly called ‘Biblical,’ is boldly spreading through the whole world, which, spurning the traditions of the Holy Fathers and against the well-known decree of the Council of Trent, is aiming with all its strength and means toward this: to translate – or rather mistranslate – the Sacred Books into the vulgar tongue of every nation… And to avert this plague, Our predecessors have published many Constitutions… We, also, in accord with our Apostolic duty, encourage you, Venerable Brothers, to be zealous in every way to remove your flock away from these poisonous pastures. ‘Reprove, entreat, be instant in season, out of season, in all patience and doctrine’ [2 Tim. 4:2], so that your faithful people, clinging exactly to the regulations of our Congregation of the Index, may be persuaded that, ‘if the Sacred Books are permitted everywhere without discrimination in the vulgar tongue, more harm will arise therefrom than advantage, because of the boldness of men.’ Experience demonstrates the truth of this” (Pope Leo XII, 1824 A.D.)

“Among the special schemes with which non-Catholics plot against the adherents of Catholic truth to turn their minds away from the faith, the biblical societies are prominent. They were first established in England and have spread far and wide so that We now see them as an army on the march, conspiring to publish in great numbers copies of the books of divine Scripture. These are translated into all kinds of vernacular languages for dissemination without discrimination among both Christians and infidels. Then the biblical societies invite everyone to read them unguided. Therefore it is just as [St.] Jerome complained in his day: they make the art of understanding the Scriptures without a teacher ‘common to babbling old women and crazy old men and verbose sophists,’ and to anyone who can read, no matter what his status. Indeed, what is even more absurd and almost unheard of, they do not exclude the common people of the infidels from sharing this kind of a knowledge. But you know the aim of these societies. In his sacred writings, Peter, after praising the letters of Paul, warns that in these epistles ‘certain things are difficult to understand, which the unlearned and the unstable distort just as they do the rest of the Scriptures, which also leads to their destruction.’ He adds at once, ‘Since you know this beforehand, be on your guard lest, carried away by the error of the foolish, you fall away from your own steadfastness.’ Hence it is clear to you that even from the first ages of Christianity this was a skill appropriate for heretics. Having repudiated the given word of God and rejected the authority of the Catholic Church, they either interpolate ‘by artifice’ into the Scriptures or pervert ‘its meaning through interpretation.’ Nor finally are you ignorant of the diligence and knowledge required to faithfully translate into another language the words of the Lord. In the many translations from the biblical societies, serious errors are easily inserted by the great number of translators, either through ignorance or deception. These errors, because of the very number and variety of translations, are long hidden and hence lead the faithful astray. It is of little concern to these societies if men reading their vernacular Bibles fall into error. They are concerned primarily that the reader becomes accustomed to judging for himself the meaning of the books of Scripture, to scorning divine tradition preserved by the Catholic Church in the teaching of the Fathers, and to repudiating the very authority of the Church. For this end the same biblical societies never cease to slander the Church and this Chair of Peter as if We have tried to keep the knowledge of sacred Scripture from the faithful.” (Pope Gregory XVI, “Inter Praecipuas”, 1844 A.D.)

“We must also be wary of those who publish the Bible with new interpretations contrary to the Church’s laws. They skillfully distort the meaning by their own interpretation. They print the Bibles in the vernacular and, absorbing an incredible expense, offer them free even to the uneducated. Furthermore, the Bibles are rarely without perverse little inserts to insure that the reader imbibes their lethal poison instead of the saving water of salvation. Long ago the Apostolic See warned about this serious hazard to the faith and drew up a list of the authors of these pernicious notions. The rules of this Index were published by the Council of Trent; the ordinance required that translations of the Bible into the vernacular not be permitted without the approval of the Apostolic See and further required that they be published with commentaries from the Fathers. The sacred Synod of Trent had decreed in order to restrain impudent characters, that no one, relying on his own prudence in matters of faith and of conduct which concerns Christian doctrine, might twist the sacred Scriptures to his own opinion, or to an opinion contrary to that of the Church or the popes. Though such machinations against the Catholic faith had been assailed long ago by these canonical proscriptions, Our recent predecessors made a special effort to check these spreading evils. With these arms may you too strive to fight the battles of the Lord which endanger the sacred teachings, lest this deadly virus spread in your flock.” (Pope Pius VIII, “Tradition Humilitati “, 1829 A.D.)

Many Catholics are once more discovering the richness of the Church’s traditional versions of the Sacred Scriptures.  Virgo Sacrata offers the “Douay-Rheims Bible & Clementina Vulgata Bible (side-by-side)“. – one of the most beautiful and accurate Bible translations available today – a word for word translation of the Clementine Vulgate. Having both Bibles side by side allows us to see exactly where the vernacular translation came from. Even those with limited Latin skills will be able to follow along, using the Douay-Rheims translation as an aid. Every Catholic educated with truly Catholic education should be able to understand Gospel in Latin.

“The use of the Latin language affords at once an imposing sign of unity and an effective safeguard against the corruption of true doctrine.”  ~ Pope Pius XII (Mediator Dei).

“The day the Church abandons her universal tongue (Latin) is the day before she returns to the catacombs.” ~ Pope Pius XII.