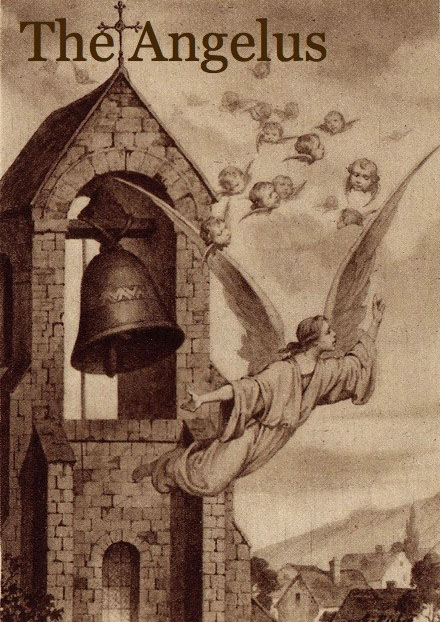 Like a heavenly messenger, the Angelus calls us to interrupt our daily, earthly routines, and turn to thoughts of God, of the Blessed Mother, and of eternity. The Angelus originated during the time of Crusades as a prayer for peace and tranquillity in the land of living and for their country.

The devotion is traditionally sung in Roman Catholic churches, convents, and monasteries (and should be recited at home), three times daily at 6:00 a.m., Noon, and 6:00 p.m. Indulgenced by Pope Benedict XIII, Sept 14, 1724.

The prayer itself is usually accompanied by the ringing of the Angelus bell, which is a call to prayer, and to strengthen Christians in piety and faith, alloyed with divine grace to disperse and destroy the forces of cruelty, and of demonic suggestion. The devil hates everything beautiful and the bells are specifically used to draw attention to the divine worship of God. “The manner of ringing the Angelus seems to have varied little since the beginning of the devotion…. Old monastic records, going back to the fifteenth century, show that the bell-ringer was directed, ‘to toll the Ave-bell nine strokes at three times, keeping the space of one Pater and Ave between each of the three tollings.’” (Source: “Externals of the Catholic Church”, 1917 Edition)

“We exhort you every day, when you hear three short interrupted peals of the bell, at the beginning of the curfew (or, in places where you do not hear it, at vesper time or nightfall you say with all possible devotion, kneeling wherever you may be, the Angelic Salutation three times at each peal, so as to say it nine times in all” (Publication of the Catholic Truth Society, 1895).

Listen to “The Angelus prayer from the “Day in the Cloister” – a chant CD available from the Virgo Sacrata shop. Audio courtesy of the Congregation of the Daughters of Mary.

The Angelus Prayer in Latin and English