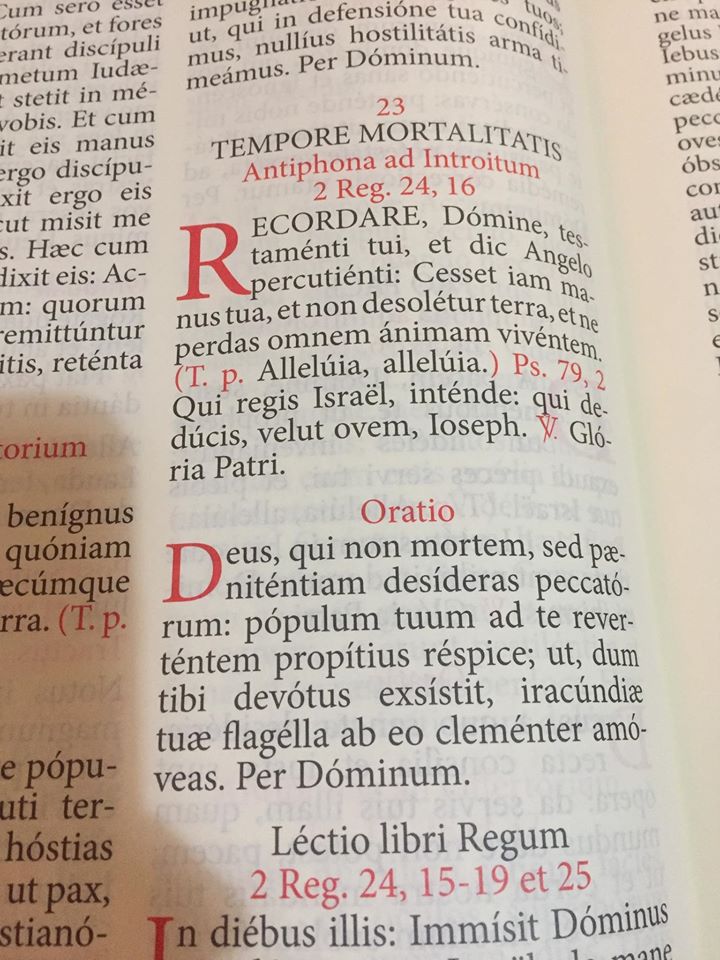 Some of the richest treasures of the traditional Roman Liturgy are the Votive Masses near the back of the St. Andrew’s Missal (1945 Edition). These devotions were systematically and purposely stripped out of the church’s life, as Fr. John Zuhlsdorf noted, to weaken our Catholic identity and to make us more susceptible to the winds of the world with its shifting fads and mores.

The votive masses were an easy target for the radical reformers, and because many faithful are now frozen at 1962 as per Summorum Pontificum, so you might hear ‘Recordare domine’ Mass only in an independent chapel that might refuse the Missal of 1962.

‘ Recordare domine’ Mass was created at the behest of Clement VI (1291-1352) at Avignon during his Black Death-spanning pontificate.

In the mid-fourteenth century the Black Death inflicted one of the most devastating losses of life in human history. This was met by exercises of collective piety such as the singing of psalms and the celebration of special votive masses, which encouraged social cohesion in the face of the tragedy.

“The connection between the ‘Recordare Domine’ Mass and the late medieval experience of disease, and possibly even the Black Death itself, has been recognized by scholars for over a century.

In 1900 Jules Viard printed the Propers as he found them in two manuscripts in the Bibliotheque de Lille, labeling the Mass a special creation of the papacy instituted to petition Heaven for deliverance from the scourge of the Black Death. Viard based this both on the texts of the various elements of the Mass and on the strength of its heading rubric, which reads that this is a: Mass for the avoidance of death, which the lord Pope Clement VI made and ordained in consultation with the lord cardinals in the year of Our Lord 1348, and he granted to those who heard and said it 260 days of indulgence. And all those hearing the aforementioned Mass should bear a burning candle for the 5 following days; and those shall not be harmed by sudden death. This is proven in Avignon and surrounding regions, and occurred in the year of Our Lord 1348.” Ref: Stability and change in the composition of a ‘Plague Mass’ in the wake of the Black Death.

The intentions of the ‘Recordare domine’ Mass for ‘Deliverance from the tyranny and death in time of pestilence’ are being offered by the Traditional Catholic chapels. Regardless of the origin of this virus (whether natural or man-made), pandemics have always been considered as divine chastisements, and the sole remedy the Church took against them was prayer and penance.

“It is fitting, beloved brethren, that the punishment of God, the coming of which we should have been feared, as we fear now, when we bear this punishment. May this suffering, as a means of supplication, open the door to God, and the very suffering that we endure, would crush the stiffness of our hearts … So, let each of us seek protection in repentant lament, while there is time to cry. ” ~ Saint Gregory the Great.

“And God indeed having winked at the times of this ignorance, now declareth unto men, that all should everywhere do penance.” Acts 17:30

“No, I say to you: but unless you shall do penance, you shall all likewise perish.” Luke 13:3

Follow the advice given by St. John Bosco in Turin during the cholera epidemic of 1854: He had asked the young men he commissioned to visit the sick to carry an image (or medal) of the Virgin with them and to pray regularly. None of them had been infected.