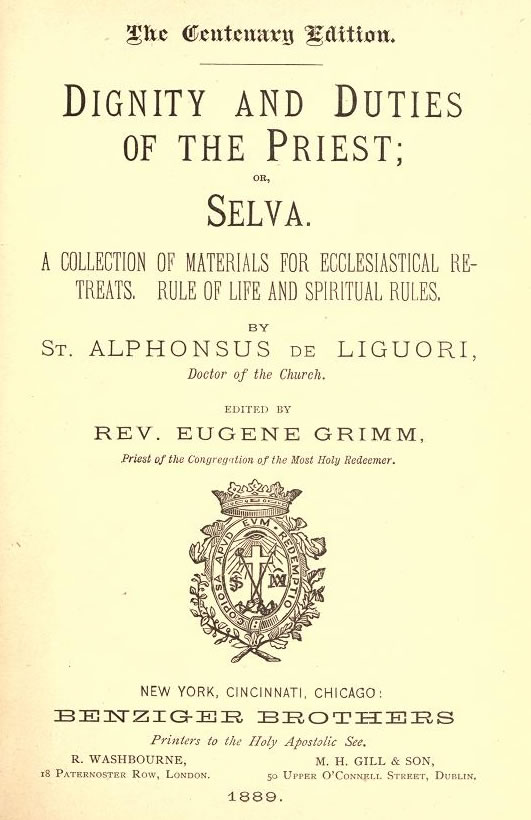 Many Catholic Saints and theologians have written about the horror of those in Mortal Sin receiving the body and blood of Our Lord.

The Catechism of Pope St. Pius X says: “He who goes to Communion in mortal sin receives Jesus Christ but not His grace; moreover, he commits a sacrilege and renders himself deserving of sentence of damnation.”

Furthermore, the Council of Trent (an infallible Council) says: “For no crime is there heavier punishment to be feared from God than for the unholy or irreligious use of the Eucharist.” (Trent, De Euch v.i.)

BUT WHAT ABOUT THE HORROR OF A PRIEST IN MORTAL SIN ?

The following text comes from the Complete Works of St Alphonsus Liguori, Doctor of the Church: “Dignity and duties of the priest: or, Selva; a collection of materials for ecclesiastical retreats. Rule of life and spiritual rules”, Volume XII.

… This horror the Lord made known in the following manner, in the year 1688, to his servant Sister Mary Crucified, of Palma, in Sicily. At first she heard a doleful trumpet, which uttered, in a tone of thunder, audible over the entire earth, the following words: Ultio, pœna, dolor (vengeance, punishment, pain).

She then saw several sacrilegious ecclesiastics singing psalms with discordant voices, and in a confused and irregular manner. She next saw one of them rise up to go to the Altar and say Mass. While he was putting on the sacred vestments, the church was covered with darkness and mourning. He approaches the Altar, and, in saying the Introibo ad altare Dei, the trumpet sounds again and repeats, Ultio, pœna, dolor.

In an instant the Altar appeared to be surrounded by flames of fire, which denoted the just fury of the Lord against the unworthy celebrant; and at the same time a great multitude of Angels were seen with swords in their hands as if to execute vengeance on him for the sacrilegious Mass which he was going to offer.

When the monster came near the Consecration, a crowd of vipers sprung from the midst of the flames to drive him away from the Altar; these vipers represented his fears and stings of conscience. But they were all useless; the impious wretch preferred his own reputation to all these stings of remorse.

Finally he pronounced the words of Consecration; and instantly the servant of God felt a universal earthquake, which caused Heaven, earth, and Hell to tremble. She saw Angels around the Altar bathed in tears; but the Divine mother wept still more bitterly at the death of her innocent Son, and at the loss of a sinful child, (the priest).

After a vision so tremendous and dismal, the servant of God was so overpowered with fear and sorrow that she could do nothing but weep.

The author of her life remarks that it was in the same year the earthquake happened which produced such havoc in the city of Naples and in the surrounding country. Hence we may infer that this earthquake was a punishment for the sacrilegious Mass at which Sister Mary was present.

It was revealed to St. Bridget that “priests who are sinners will find themselves deeper in hell than all the other damned. Oh! how great the rejoicing of the devils when a priest enters hell? All hell is in confusion to meet the priest who comes”.

“Hell below“, says Isaias, “was in an uproar to meet thee at thy coming. All the princes of the earth have risen from their thrones. All the princes of that land of woe rise up to give the first place of torment to the damned priest”. “All”, continues the prophet, “shall answer and say to thee”:

Thou also art wounded as well as we, thou art become like us priest, you once ruled over us, you have so often made the Incarnate Word descend on the altars, you have delivered so many souls from hell, and now you have become like us, miserable and tormented as we are: Thy pride is brought to hell.

Your pride, by which you have despised God and your neighbor, has in the end brought you to this land of misery, Thy carcass is fallen down : under thee shall the moth be strewed, and worms shall be thy covering? As a king you shall have a royal couch and a purple robe: behold, fire and worms shall forever corrode your body and your soul.

Oh! how shall the devils then scoff at all the Masses, sacraments, and sacred functions of the damned priest! And have mocked at her sabbaths?

By St Alphonsus Liguori, Doctor of the Church.

Related: The Attacks Made by Heretics upon the Holy Sacrifice of the Mass.