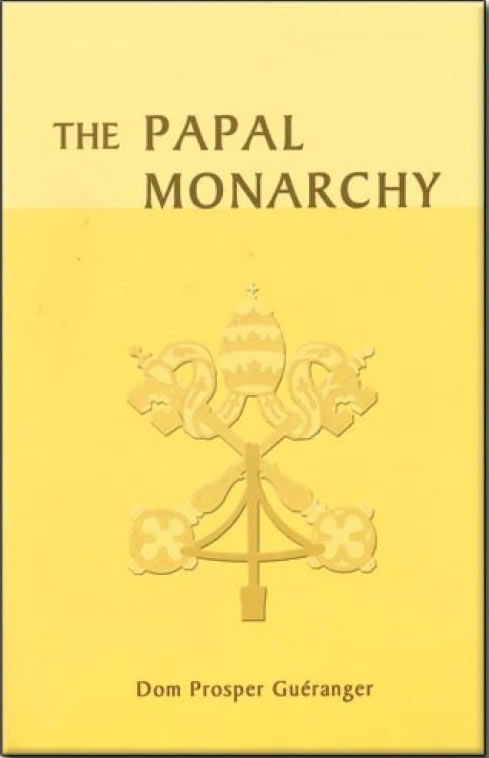 Brief from Pope Pius IX on The Papal Monarchy.

It is truly regrettable, dear son, that there are among Catholics certain men who, while glorying in this name, are thoroughly imbued with corrupted principles, and adhere to them so resolutely that they no longer know how to subject their intellect simply to a contrary judgment of this Holy See, even when that judgment is corroborated by the general consensus and recommendations of the Bishops. Instead, thinking that the progress and happiness of human society depends entirely upon those principles, they endeavor to incline the Church to their opinion, and, imagining that wisdom is theirs alone, they do not blush to designate by the name of “the ultramontane party” all the rest of the Catholic family which thinks otherwise.

Indeed, they take this madness to such extremes that they set out to recast even the divine constitution of the Church and to adapt it to more recent forms of civil government, so as to diminish more easily the authority of the supreme Ruler placed over it by Christ, whose prerogatives they dread. For this reason they boldly advance certain pernicious doctrines which have been condemned repeatedly, as if there could be no doubt about them, or as though they could be freely taught, at least; from old proponents of these doctrines they scrape together historical quibbles, mutilated passages, calumnies hurled at the Roman Pontiffs, and all sorts of sophistries. With the utmost impudence they bring all these things up again, completely setting aside the solid arguments with which they have been refuted a hundred times. Their purpose is to agitate minds and to incite the men of their faction and the ignorant crowd against the general consensus of the others.

That being the case, besides the harm that they have caused by troubling the faithful and reducing the most serious questions to the level of marketplace conversation, We are compelled to deplore their foolishness, which is equal to their audacity. For if they firmly believed, with the other Catholics, that an ecumenical council is governed by the Holy Spirit, and that can it define or propose dogmas to be believed only by His inspiration, it would never have occurred to them that things which are not in fact revealed or which are harmful to the Church could ever be defined as matters of faith, or that human maneuvers could ever impede the action of the Holy Spirit, or prevent the definition of truths which have been revealed and are beneficial to the Church.

They surely would not assert that it was forbidden to propose to the council Fathers, in a suitable manner, the difficulties that they consider to be in opposition to this or that definition, so that the truth might emerge more clearly from the debate. If this were their sole motive, they would henceforth abstain from the stratagems by which votes are customarily gained in popular assemblies, and they would tranquilly and respectfully await the result of illumination from on high. Therefore, in Our estimation, you have rendered an extremely useful service to the Church by undertaking to refute the main propositions in writings of that sort, and by demonstrating their hostile, impetuous, and contrived character; you have accomplished this with such solid arguments, such brilliance, and such an abundance of evidence drawn from sacred antiquity and ecclesiastical science, that – conveying many things in few words – you have proved empty the pretense of wisdom of those who have wrapped their opinions in ignorant talk. In re-establishing the truth of the Faith, of right reason, and of history, you have acted in the interests of believers, whether learned or uneducated. We express therefore Our gratitude to you for the gift of this volume, and We predict an auspicious and very wide circulation of the work which you have produced by lamplight. As an augury of this success and as a pledge of Our paternal benevolence, We impart to you with great affection Our apostolic blessing.

Given in Rome, at the Basilica of St. Peter, March 12, 1870, the twenty-fourth year of Our Pontificate.