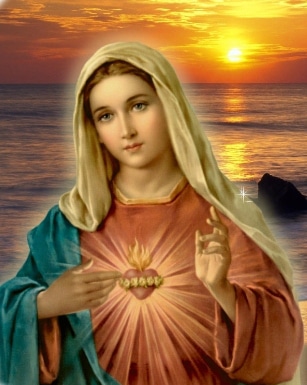 In Fatima, Portugal, (1917) Our Lady appeared to three shepherd children. She said: “Pray the rosary every day to bring peace to the world and end the war.“

She also promised to assist souls at the hour of death with the graces necessary for salvation, who on the first Saturday of five consecutive months, would go to Confession and receive Holy Communion, recite five decades of the rosary and keep her company for a quarter of an hour while meditating on the mysteries of the rosaries with the intention of making reparation to her Immaculate Heart.

According to the 1962 Missal of the Roman Rite, August 22nd is the feast of the Immaculate Heart of the Blessed Virgin Mary.

Devotion to the Immaculate Heart of Mary is primarily based upon the Sacred Scriptures. In the New Testament, there are two references to the Heart of Mary in the Gospel according to St. Luke: “Mary treasured all these things and reflected on them in her heart. ” (Lk 2: 19) and ” His mother meanwhile kept all these things in her heart. ” (Lk 2:51)

In the Old Testament, the heart is seen as the symbol of the depths of the human soul, the center of its choices and commitments. For all mankind, it is a symbol of love. In the Book of Deuteronomy we are told, “You shall love the Lord, your God, with all your heart, and with all your soul and with all your strength.” (Dt. 6:5) When Our Lord Jesus Christ was asked by the scribes which was the first commandment, he answered them by quoting this verse to them. (see Mk. 12:29-31)

Historically, devotion to the Heart of Mary can be traced to the twelfth century with such writers as St. Anselm (d. 1109) and St. Bernard of Clairvaux (d. 1153) who is considered as one of the most influential writers in Marian devotion. St. Bernardine of Siena ( 1380-1444) has been called the Doctor of the Heart of Mary due to his writings on Mary’s heart. He wrote, “from her heart, as from a furnace of Divine Love, the Blessed Virgin spoke the words of the most ardent love.” St. John Eudes (1601 -1680) helped by his writings to begin a renewal in this devotion. Both Pope Leo XIII and Pope St. Pius X called him, “the father, Doctor, and Apostle of the liturgical cult of the Sacred Hearts of Jesus and Mary.” Even two decades before the first liturgical celebrations in honor of the Heart of Jesus, St. John Eudes and his followers observed February 8th as the feast of the Heart of Mary as early as 1643. Pope Pius VII (d. 1823) extended its celebration to any diocese or congregation requesting it.

Devotion to Mary’s Heart has a greater flowering following the manifestation of the Miraculous Medal to St. Catherine Laboure in 1830 and the Appearances of’ Our Lady in Fatima. From May 13 to October 13, 1917, our Blessed Mother Mary appeared to three children, Jacinta and Francisco Marto and their cousin Lucia dos Santos in Fatima, Portugal. On July 13 she told them: “to save poor sinners, God wishes to establish in the world devotion to my Immaculate Heart.” The entire Fatima message is one of prayer, penance and making sacrifices and reparation to God for the many offences against Him.

The above text is based on the article written by Rev. Matthew R. Mauriello.