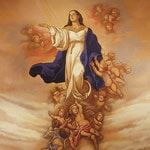 “The Immaculate Conception of the Blessed Virgin Mary”, text  from “The St. Andrew Daily Missal” (1937)

Having decided from all eternity to make Mary Mother of the Incarnate Word (Epistle), God willed that she should crush the head of the serpent from the moment of her conception.

He covered her “with a Mantle of Holiness” (Introit) and, “preserving her Soul from all stain, He made her a worthy dwelling place for His Son” (Collect).

The Feast of the “Conception” of the Virgin was; from the 8th-Century, celebrated in the East on 9 December; from the 9th-Century in Ireland and 3 May; and in the 11th-Century in England on 8 December.

The Benedictines, with Saint Anselm, and the Franciscans, with Duns Scotus (1308), favoured the Feast of the “Immaculate Conception,” which, in 1128, was kept in Anglo-Saxon Monasteries.

In the 15th-Century, Pope Sixtus IV, a Franciscan, erected at the Vatican the Sixtine (Sistine) Chapel in honour of the Conception of the Virgin. And, on 8 December 1854, Pope Pius IX officially proclaimed this great Dogma, making himself the mouthpiece of all the Christian tradition summed up in the words of the Angel: “Hail Mary, full of Grace, the Lord is with thee, Blessed art thou among women” (Gospel). “Thou art all beautiful, O Mary, and the original stain is not in thee” says in truth the Alleluia verse.

Like the Dawn, which announces the day, Mary precedes the Sun of Justice, which will soon illumine the world of Souls. Bringing to us her Son, it is she who first appears in the Liturgical Cycle.

Let us ask God “to heal us and to deliver us from all our sins” (Secret, Postcommunion) in order that, by the Graces which specially belong to the Feast of the “Immaculate”, we may become more worthy of receiving Jesus in our hearts when He comes into them on 25 December.

“Raise up your heads, then, ye children of Adam, and shake off your chains! This day the humiliation which weighed you down is annihilated. Behold! Mary, who is of the same flesh and blood as yourselves, has seen the torrent of sin, which swept along all the generations of mankind, flow back at her presence and not touch her: the infernal dragon has turned away his head, not daring to breathe his venom upon her; the dignity of your origin is given to her in all its primitive grandeur. This happy day, then, on which the original purity of your race is renewed, must be a Feast to you. The second Eve is created; and from her own blood (which, with the exception of the element of sin, is the same as that which makes you to be the children of Adam), she is shortly to give you the God-Man, Who proceeds from her according to the flesh, as He proceeds from the Father according to the eternal generation.”
~ THE LITURGICAL YEAR, Vol. I by Dom Gueranger, in commemoration of the Feast of the Immaculate Conception.

Prayer of St. Pius X to the Immaculate Virgin Mary

O most Holy Virgin, who didst find favour in God’s sight and hast become His Mother; O Virgin, immaculate in body and soul, in thy faith and in thy love, look down with pity on the wretched who in our need seek thy powerful protection.

May we never be caught in the snares around us, but rather may we all reach the harbour of salvation. Despite the awesome perils which threaten, may God’s Church and all Christian society sing out once again the hymn of deliverance, of victory and of peace. Amen.