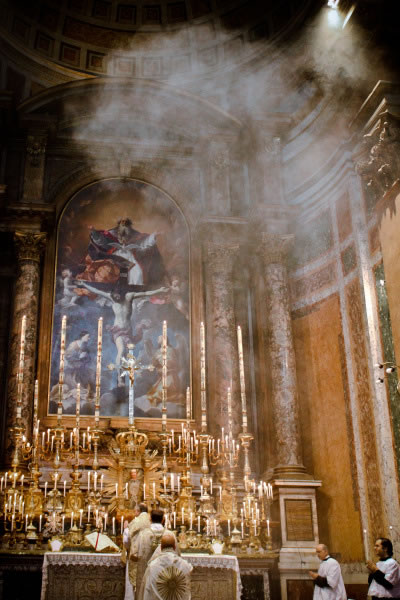 The following clear-sighted and prophetic letter was penned by the composer, musicologist, organist, and essayist Msgr. Domenico Celada in 1969.

It is a document that prophesied what would happen in the Church—all the more relevant today when Traditionis Custodes attempts to stifle fidelity to the Tridentine Rite, without caring about the liturgical degradation that, with the introduction of a new Mass, has been perpetrated and continues dramatically in these times of deep crisis in the Catholic Church. Msgr. Celada’s open letter unmasked (and unmasks) the spirit that animated (and animates) the saboteurs of tradition. Nor did Msgr. Celada, who taught music and history of Gregorian chant at the Lateran University, fail to suffer for his outspokenness: he was removed from all his positions. (Some of the foregoing has been adapted from here.) Re-posted from NLM archive.

To the Illustrious Assassins of Our Holy Liturgy

For a long time I have wanted to write to you, illustrious assassins of our Holy Liturgy. Not because I hope that my words will have any effect on you, who have too long fallen into the claws of Satan and become his most obedient servants, but so that all those who suffer from the countless crimes committed by you may find their voice again.

Do not deceive yourselves, gentlemen. The atrocious wounds that you have opened in the body of the Church cry out for vengeance before God, the just Avenger.

Your plan to subvert the Church, through the liturgy, is very ancient. Many of your predecessors, much more intelligent than you, tried to carry it out, and the Father of Darkness has already welcomed them into his kingdom. And I remember your anger, your mocking sneer, when, some fifteen years ago, you desired the death of that great Pontiff, the servant of God Eugenio Pacelli, because he had divined your designs and opposed them with the authority of the Triregnum. After that famous conference on “pastoral liturgy,” on which the very clear words of Pope Pius XII had fallen like a sword, you left mystical Assisi foaming with anger and venom.

Now you have succeeded—for now, at least. You have created your “masterpiece”: the New Liturgy.

That this is not the work of God is demonstrated first of all (leaving aside the dogmatic implications) by a very simple fact: it is frighteningly ugly. It is a cult of ambiguity and equivocation, not infrequently a cult of indecency. This is enough to understand that your “masterpiece” does not come from God, the source of all beauty, but from the ancient slasher of God’s works.

Yes, you have deprived the Catholic faithful of the purest emotions, derived from the sublime things that have substantiated the liturgy for millennia: the beauty of words, gestures, music. What have you given us in return? A hodgepodge of ugliness, of grotesque “translations” (as is well known, your father down there has no sense of humor), of gastric emotions aroused by the mewing of electric guitars, of gestures and attitudes that are equivocal to say the least.

But, as if that’s not enough, there is another sign that shows that your “masterpiece” does not come from God. And that is the instruments you have had to use in order to realize it: fraud and lies. You have succeeded in making people believe that a Council had decreed the disappearance of the Latin language, the archiving of the heritage of sacred music, the abolition of the tabernacle, the overturning of the altars, the prohibition of bending the knee before Our Lord present in the Eucharist, and all your other progressive steps, which are part (the lawyers would say) of a “single criminal design.”

You knew very well that the “lex orandi” is also the “lex credendi,” and that, therefore, by changing the one, you would change the other.

You knew that by pointing your poisoned spears at the living language of the Church, you would practically kill the unity of the faith.

You knew that, by decreeing the death of Gregorian chant and sacred polyphony, you could introduce at will all the pseudo-musical indecencies which desecrate divine worship and cast an equivocal shadow over liturgical celebrations.

You knew that by destroying tabernacles, by replacing altars with “tables for the Eucharistic meal,” by denying the faithful the opportunity to bend their knees before the Son of God, you would in short order extinguish faith in the Real Presence.

You have worked with your eyes open. You raged against a monument to which heaven and earth had set their hands, because you knew that with it you were destroying the Church. You went so far as to take away the traditional Holy Mass, even tearing out the heart of the Catholic liturgy—that same Holy Mass for which we were ordained priests, and which no one in the world will ever be able to forbid us, because no one can trample on a natural right.

I know: you may now laugh at what I am about to say. Go ahead, laugh at it. You have gone so far as to remove from the Litany of the Saints the invocation “a flagello terraemotus, libera nos, Domine” [from the scourge of earthquakes, deliver us, O Lord], and never before has the earth trembled at so many latitudes. You have removed the invocation “a spiritu fornicationis, libera nos Domine” [from the spirit of fornication, deliver us, O Lord], and never have we been so covered over as we are now by the mud of immorality and pornography in its most repellent and degrading forms. You have abolished the invocation “ut inimicos sanctae Ecclesiae humiliare digneris” [that you might deign to humiliate the enemies of Holy Church], and never before have the enemies of the Church prospered in all ecclesiastical institutions, at every level.

Laugh, laugh… Your laughter is boisterous and joyless. Certainly none of you know, as we do, the tears of joy and sorrow. You are not even capable of crying. Your bovine eyes, whether glass or metal balls, look at things without seeing them. You are similar to the cows watching the trains pass by. To you I prefer the thief who snatches the gold chain from the child, I prefer the mugger, I prefer the robber with weapons in his fist, I even prefer the brute and the violator of graves. They are people far less dirty than you, who have robbed God’s people of all their treasures.

While we wait for your father down there to welcome you into his kingdom, “where there is weeping and gnashing of teeth,” I want you to know of our unshakeable certainty that those treasures will be returned to us. And it will be a restitutio in integrum [a total restoration]. You have forgotten that Satan is the eternal loser.

Related: The Attacks Made by Heretics upon the Holy Sacrifice of the Mass

On Communion with Counterfeit Church: Faithful have the right to know …