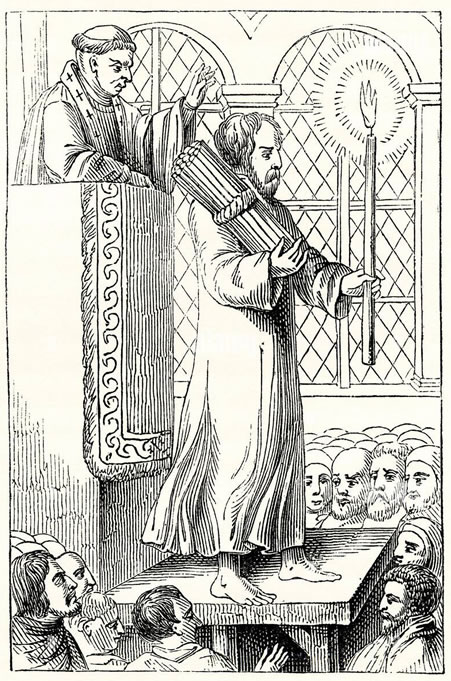 Very differently from now. It then commenced with the Feast of St. Martin, and was observed by the faithful like the Forty Days’ Fast, with strict penance and devotional exercises, as even now most of the religious communities do to the present day.

The Church has forbidden all turbulent amusements, weddings, dancing and concerts, during Advent. Pope Sylverius ordered that those who seldom receive Holy Communion should, at least, do so on every Sunday in Advent.

The Church called us to follow the strict norms not so long ago. In the Orthodox Church, fasting remains normative for 40 days prior to Christmas. “I accept with sincere belief the doctrine of faith as handed down to us from the Apostles by the orthodox Fathers, always in the same sense and with the same interpretation.” — Pope Pius X.

The picture on the left is an old engraving of a man punishing himself in church by participating in a penance in the middle ages. Penance is self-punishment carried out to try to right a wrong. This man holds a candle and faggot. A faggot is a bundle of twigs bound together. A faggot was used to indicate ‘punishment’ (heretics who recanted were required to wear an emblem of a faggot on their sleeve as reminder of their misdeeds). An act of penance occurs when the person publicly tries to make up for any wrongs or misdeeds. It usually included a confession to a priest that required some form of self-sacrifice.

The widespread relaxation of moral discipline among the nominally Christian people of the late Western Empire is abundantly attested. On relaxation of penance in Lent (the same for Advent), Pope Benedict XIV (1741 A.D.) stated that “The observance of Lent is the very badge of Christian warfare. By it we prove ourselves not to be enemies of the cross of Christ. By it we avert the scourges of divine justice. By it we gain strength against the princes of darkness, for it shields us with heavenly help. Should mankind grow remiss in their observance of Lent, it would be a detriment to God’s glory, a disgrace to the Catholic religion, and a danger to Christian souls. Neither can it be doubted that such negligence would become the source of misery to the world, of public calamity, of private woe.”

O God, who by Thy gracious Advent hast brought joy into this world, grant us, we beseech Thee, Thy grace to prepare ourselves by sincere penance for its celebration and for the Last Judgment. Amen.