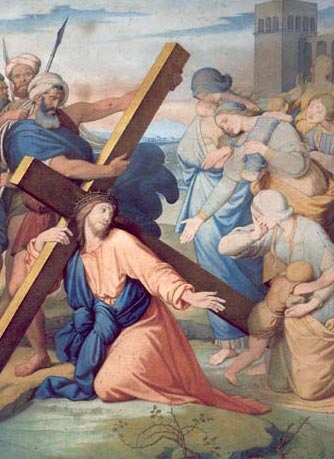 “And there followed him a great multitude of people, and of women, who bewailed and lamented him.

But Jesus turning to them, said: Daughters of Jerusalem, weep not over me; but weep for yourselves, and for your children.

Then shall they begin to say to the mountains: Fall upon us; and to the hills: Cover us. For if in the green wood they do these things, what shall be done in the dry?” (Luke 23:27-32 Douay-Rheims 1899)

Filiæ mæstæ Jerusalem is the first of two introduzioni written to come before a setting of the Miserere. The Miserere itself is presumed to be lost. RV 638 consists of two recitatives around a single aria. This text concerns sad daughters of the Jerusalem after the death of Jesus Christ and the mourning of nature itself.

NOTE: “The Introduzione is a fairly unusual form of which we have few examples. Two of them were written for a Miserere in C-minor which unfortunately has not survived. The Motet “Filiae maestae Jerusalem” is made up of an aria (Sileant Zephiri; Largo 3/4 time, F-minor) in three-part form, a lyric, rhythmic dialogue between voice and orchestra, framed by two accompanied recitativos. The first of these is expressively accented over long, solemn, movingly held chords, suggesting the weeping of the Daughters of Jerusalem and of all creation at the memory of Christ’s suffering.”