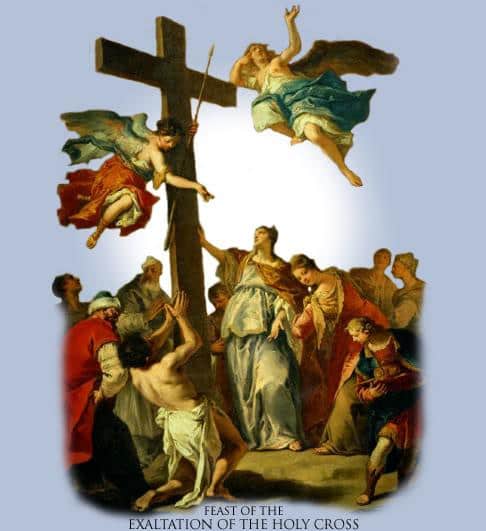 On September 14, in 335, took place the dedication of Constantine’s basilica, which enclosed both Calvary and the Holy Sepulchre. “At this date,” says Etheria, “the cross was discovered. And the anniversary is celebrated with as much solemnity as Easter or the Epiphany.” Such was the origin of the feast of the Exaltation of the Cross. “When I shall be raised on high, I shall draw everything unto Me” (Gospel), Jesus has said. It is because of the Saviour humbled Himself, being obedient even to the death of the cross, that God exalted Him and gave Him a name above all other names (Epistle). Wherefore we must glory in the cross of Jesus, for He is out live and our salvation (Introit) and He protects His servants against the wiles of their enemies (Offertory, Communion, Postcommunion).

Towards the end of the reign of Phocas, Chosroes, King of Persia, says the legend of the breviary, took Jerusalem, where he put to death several thousand Christians and carried off to Persia the Cross of our Lord Jesus Christ, which St. Helen had placed on mount Calvary.

Heraclius, the successor of Phocas, had recourse to many fasts and prayers, imploring with great fervor the help of God. He assembled an army and defeated Chosroes. He then insisted on the restitution of the cross of the Lord. Thus the precious relic was recovered after an interval of fourteen years. On his return to Jerusalem, Heraclius carried it on his shoulders in great pomp to the mountain where the Saviour Himself had borne it (A.D. 629).

An extraordinary miracle marked the occasion. Heraclius, who was loaded with ornaments of gold and precious stones, was held back by an invisible force at the entrance gate of mount Calvary and vain were his efforts to enter.

As the Emperor and all those who witnessed the scene were astonished, Zacharias, Bishop of Jerusalem, said to him: “Consider, O Emperor, that with these triumphal ornaments you are far from imitating the poverty of Jesus Christ and His humility in bearing His cross.” Heraclius thereupon doffed his splendid garb and walked barefooted with a common cloak on his shoulders to Calvary, where he again deposited the cross. The feast of the Exaltation of the Holy Cross on the original spot, the anniversary of which was celebrated on this day, became of great importance.

Let us join, in spirit, the faithful who in the Church of the Holy Cross at Rome venerate on this day the relics of the sacred wood exposed for the occasion, so that, having been privileged to adore it on this feast when we rejoice for its exaltation, we may likewise possess for all eternity the salvation and glory the Cross has won for us (Collect, Secret).

ON THE EXALTATION OF THE CROSS by Dom Gueranger

Consider first, that on this day, upon occasion of the recovery of the cross of Christ out of the hands of infidels, and the triumphant setting it up again in its place in the church of Mount Calvary, the church of God celebrates the exaltation of him that died for us upon the cross, and his glorious triumph over sin and death, and over all the powers of hell and in consequence thereof the establishment of his kingdom, by which he reigns by grace at present in the souls of all his servants throughout the world, and shall reign in them for all eternity hereafter in glory. according to that of St. John xii. 31, 32, spoken with relation to his victory on the cross, ‘Now is the judgment’ (that is, the condemnation,) ‘of the world, now shall the prince of this world’ (the devil) ‘be cast out.’ ‘And I, if I be lifted up from the earth, will draw all things to myself.’ Rejoice, O my soul, in the triumph of thy crucified king, and beg that he would establish his reign in thee, and draw up thy heart from this wretched earth and unite it for ever to himself.

Consider 2ndly, that the dispositions of a Christian, in order to celebrate in a proper manner the feast of the exaltation of the cross, ought to be suitable to the maxims of the cross, and to the dispositions of Christ crucified. Dispositions of standing off from the pride, ambition, avarice, and vanity of the world, condemned by the poverty and humility of the cross; as also from the love of sensual and worldly pleasures, condemned by the mortification of the cross. Dispositions of taking up our crosses and following our crucified king, even to the death of the cross. Dispositions of waging a perpetual war against that triple concupiscence, which separates worldlings from the cross of Christ, viz., the lust of the flesh, the lust of the eyes, and the pride of life; till dying to the world and to ourselves, we be lifted up with Christ from the earth; crucified to the world, and the world to us; and thus being entitled to a share in his exaltation and triumphs. But, O my soul, how unfit are we to celebrate the victories of our crucified king over death, sin, and hell; whilst we by pride, self-love, and the love of the world wilfully remain slaves to those same enemies, whose usurpation he sought to abolish by his death!

Consider 3rdly, the sentiments of St. Paul with relation to the cross of Christ, Gal. ii. 19, 20, ‘With Christ I am nailed to the cross.’ ‘And I live, now not I, but Christ liveth in me; who loved me and delivered himself for me.’ Chap. vi. 14: ‘God forbid that I should glory, save in the cross of our Lord Jesus Christ, by whom the world is crucified to me, and I to the world!’ He tells the Corinthians, 1 Cor. ii. 2, ‘that he judged not himself to know anything among them but Jesus Christ, and him crucified.’ and chap. i. 23, 24, that he preached nothing but ‘Christ crucified a stumbling-block to the Jews, and foolishness to the Gentiles; but to the true believers the power of God, and the wisdom of God.’ He proposes his own conduct as a model to the Philippians, Philip. iii. 17, 18, and warns them with tears, against all sensual and earthly-minded Christians, whom he calls enemies of the cross of Christ. Oh, how high was the cross of Christ exalted in the heart of the apostle! It reigned there without control. And as it was exalted in him by love and esteem, so it exalted him here to the glorious fellowship of the sufferings of Christ crucified; and hereafter to that eternal kingdom which our Lord has purchased by his cross, for all the true friends and followers of the cross. O how happy are all they, that, like the apostle, are sincere lovers of the cross of Christ!

Conclude for thy own practice to honour the triumphs of thy crucified king, by planting thyself at the foot of his cross, and there constantly attend to him, and study well the lessons he teaches thee from his cross, and enter into all his sentiments. He will teach thee to submit to thy crosses with patience, to undergo them with cheerfulness, yea, to embrace them with joy. He will undeceive thee, with regard to the false maxims of worldly pride, of the love of riches, and of sensual pleasures; and from his cross will preach to thee his truths, and discover to thee the lovely charms that are found in humility, poverty of spirit, contempt of the world, and mortification of the flesh. His cross is the school in which he will teach thee all good, and from which he will not cease to communicate to thee all grace, till at length he draws thee to himself, and makes thee his own for ever.

Dom Guéranger, abbot of Solesmes from 1837-1875, was one of the leading monastics and liturgists of his generation, and his writings were highly influential both in France and abroad.

In this sign of the Holy Cross will we, all and each, overcome the devil and his forces to reach our heavenly goal much like Constantine did when he followed the apparition which instructed him to engage in battle with the sign of the Cross as his insignia.