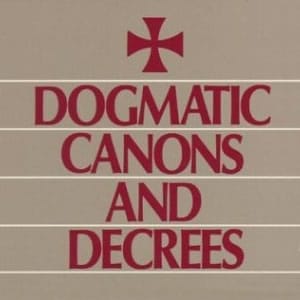 Find out what exactly what the Church teaches on Original Sin, Grace, each Sacrament, the Mass, Purgatory, statues, indulgences, etc. These canons are infallible and absolutely unchangeable. The canons and decrees of Vatican Council I define papal infallibility. The Syllabus, written in 1861, is astonishingly contemporary and a revelation to most Catholics. It clearly enunciates 80 modern errors.

Dogmatic Canons and Decrees: authorized translations of the dogmatic decrees of the Council of Trent (1545-1563), the Decree on the Immaculate Conception, the Syllabus of Pope Pius IX (1846-1878), and the decrees of the First Vatican Council I (1869-1870)

English versions of recent ecclesiastical decrees are easily found in pamphlet, book, or periodical. Up to the present time, however, this has not been true of earlier decrees. Those of Trent, bearing on justification, grace, the sacraments, etc., have long been out of print; so also the decree on the Immaculate Conception and the Syllabus of Pope Pius IX. It has seemed advisable, therefore, to publish in one volume, a collection of the most important dogmatic decrees from the Council of Trent down to the reign of Pope Leo XIII.

No one will fail to recognize the desirability of such a collection. In almost every doctrinal treatise or sermon, some of these decrees are sure to be used. In the majority of cases, the writer or preacher is unable to quote directly, because in matters so important he naturally shrinks from the responsibility of giving an exact English rendering of the original Latin. With an approved translation to guide him, he will now be able to quote directly, and thus to state and explain the doctrines of the Church in her own words.

In the present volume we have used Canon Waterworth’s translation for the Council of Trent; Cardinal Manning’s for the Vatican Council; and for the Syllabus, the one authorized by Cardinal McCabe, Archbishop of Dublin. All of these translations have been approved by ecclesiastical authority.

Dogmatic Canons and Decrees of the Council of Trent, Vatican Council I, Plus the Decree on the Immaculate Conception and the Syllabus of Errors

DECREES OF THE COUNCIL OF TRENT

Decree on the Symbol of Faith 3-6

Decree on the Canonical Scriptures 7-14

Canons on the Sacraments in General 58-62

Canons on the Sacrament of Baptism 62-66

Canons on the Sacrament of Confirmation

Decree on the Sacrament of the Holy Eucharist 67-81

Canons on the Sacrament of the Holy Eucharist 81-84

Doctrine on the Sacrament of Penance 85-109

Doctrine on the Sacrament of Extreme Unction 109-115

Canons on the Sacrament of Extreme Unction 121-122

Doctrine on Communion under Both Species, and the Communion of Infants 123-129

Canons on Communion under Both Species, and the Communion of Infants 129-130

Doctrine on the Sacrament of Matrimony 159-161

Canons on the Sacrament of Matrimony 161-164

On the Invocation, Veneration, and Relics of Saints, and on Sacred Images 1

Profession of the Tridentine Faith 175-179

DEFINITION OF THE IMMACULATE CONCEPTION  181-184

Download in PDF format: Dogmatic Canons and Decrees of the Council of Trent
Published in NEW YORK: COPYRIGHT, 1912, BY THE DEVIN-ADAIR COMPANY.