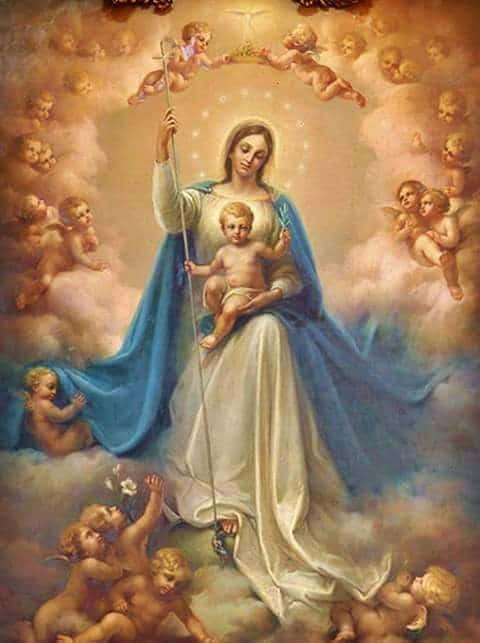 1. It was through the Blessed Virgin Mary that Jesus came into the world, and it is also through her that he must reign in the world.

2. Because Mary remained hidden during her life she is called by the Holy Spirit and the Church “Alma Mater”, Mother hidden and unknown. So great was her humility that she desired nothing more upon earth than to remain unknown to herself and to others, and to be known only to God.

3. In answer to her prayers to remain hidden, poor and lowly, God was pleased to conceal her from nearly every other human creature in her conception, her birth, her life, her mysteries, her resurrection and assumption. Her own parents did not really know her; and the angels would often ask one another, “Who can she possibly be?” for God had hidden her from them, or if he did reveal anything to them, it was nothing compared with what he withheld.

4. God the Father willed that she should perform no miracle during her life, at least no public one, although he had given her the power to do so. God the Son willed that she should speak very little although he had imparted his wisdom to her. Even though Mary was his faithful spouse, God the Holy Spirit willed that his apostles and evangelists should say very little about her and then only as much as was necessary to make Jesus known.

5. Mary is the supreme masterpiece of Almighty God and he has reserved the knowledge and possession of her for himself. She is the glorious Mother of God the Son who chose to humble and conceal her during her lifetime in order to foster her humility. He called her “Woman” as if she were a stranger, although in his heart he esteemed and loved her above all men and angels. Mary is the sealed fountain and the faithful spouse of the Holy Spirit where only he may enter. She is the sanctuary and resting-place of the Blessed Trinity where God dwells in greater and more divine splendor than anywhere else in the universe, not excluding his dwelling above the cherubim and seraphim. No creature, however pure, may enter there without being specially privileged.

6. I declare with the saints: Mary is the earthly paradise of Jesus Christ the new Adam, where he became man by the power of the Holy Spirit, in order to accomplish in her wonders beyond our understanding. She is the vast and divine world of God where unutterable marvels and beauties are to be found. She is the magnificence of the Almighty where he hid his only Son, as in his own bosom, and with him everything that is most excellent and precious. What great and hidden things the all-powerful God has done for this wonderful creature, as she herself had to confess in spite of her great humility, “The Almighty has done great things for me.” The world does not know these things because it is incapable and unworthy of knowing them.

7. The saints have said wonderful things of Mary, the holy City of God, and, as they themselves admit, they were never more eloquent and more pleased than when they spoke of her. And yet they maintain that the height of her merits rising up to the throne of the Godhead cannot be perceived; the breadth of her love which is wider than the earth cannot be measured; the greatness of the power which she wields over one who is God cannot be conceived; and the depths of her profound humility and all her virtues and graces cannot be sounded. What incomprehensible height! What indescribable breadth! What immeasurable greatness! What an impenetrable abyss!

8. Every day, from one end of the earth to the other, in the highest heaven and in the lowest abyss, all things preach, all things proclaim the wondrous Virgin Mary. The nine choirs of angels, men and women of every age, rank and religion, both good and evil, even the very devils themselves are compelled by the force of truth, willingly or unwillingly, to call her blessed. According to St. Bonaventure, all the angels in heaven unceasingly call out to her: “Holy, holy, holy Mary, Virgin Mother of God.” They greet her countless times each day with the angelic greeting, “Hail, Mary”, while prostrating themselves before her, begging her as a favor to honor them with one of her requests. According to St. Augustine, even St. Michael, though prince of all the heavenly court is the most eager of all the angels to honor her and lead others to honor her. At all times he awaits the privilege of going at her word to the aid of one of her servants.

9. The whole world is filled with her glory, and this is especially true of Christian peoples, who have chosen her as guardian and protectress of kingdoms, provinces, dioceses, and towns. Many cathedrals are consecrated to God in her name. There is no church without an altar dedicated to her, no country or region without at least one of her miraculous images where all kinds of afflictions are cured and all sorts of benefits received. Many are the confraternities and associations honoring her as patron; many are the orders under her name and protection; many are the members of sodalities and religious of all congregations who voice her praises and make known her compassion. There is not a child who does not praise her by lisping a Hail Mary. There is scarcely a sinner, however hardened, who does not possess some spark of confidence in her. The very devils in hell, while fearing her, show her respect.

10. And yet in truth we must still say with the saints: De Maria numquam satis : We have still not praised, exalted, honored, loved and served Mary adequately. She is worthy of even more praise, respect, love and service.

11. Moreover, we should repeat after the Holy Spirit, “All the glory of the king’s daughter is within”, meaning that all the external glory which heaven and earth vie with each other to give her is nothing compared to what she has received interiorly from her Creator, namely, a glory unknown to insignificant creatures like us, who cannot penetrate into the secrets of the king.

12. Finally, we must say in the words of the apostle Paul, “Eye has not seen, nor ear heard, nor has the heart of man understood” the beauty, the grandeur, the excellence of Mary, who is indeed a miracle of miracles of grace, nature and glory. “If you wish to understand the Mother,” says a saint, “then understand the Son. She is a worthy Mother of God.” Hic taceat omnis lingua: Here let every tongue be silent.

13. My heart has dictated with special joy all that I have written to show that Mary has been unknown up till now, and that that is one of the reasons why Jesus Christ is not known as he should be. If then, as is certain, the knowledge and the kingdom of Jesus Christ must come into the world, it can only be as a necessary consequence of the knowledge and reign of Mary. She who first gave him to the world will establish his kingdom in the world.