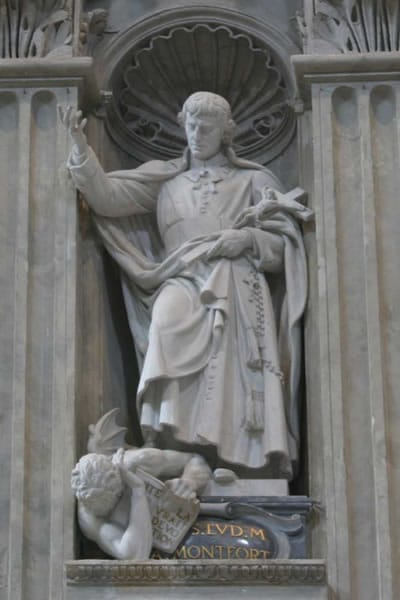 Saint Louis-Marie Grignion de Montfort (31 January 1673 – 28 April 1716) was a French Roman Catholic priest and Confessor. He was known in his time as a preacher and was made a missionary apostolic by Pope Clement XI.

In his Treatise on True Devotion to Mary, Saint Louis-Marie Grignion de Montfort included a chapter on Mary’s role in the Latter Times which stressed the necessity of appealing to Her intercession in order to combat the forces of Satan. He wrote the work in 1712, four years before his death at 43. This book remained hidden away until 1842 when it was discovered by accident in a home for priests of the “Company of Mary” in France.

Almost immediately after being discovered it came before the reigning Pope at the time: Pope Gregory XVI, who just 4 years earlier on September 7th 1838 had declared Montfort Venerable, and he called for its immediate publication. Every Pope since it’s discovery has promoted and practiced this devotion.

St. Louis de Montfort prophesied that the army of souls consecrated to Mary will be Her instrument in defeating the Devil and his Antichrist. As Satan gains power in the world, so much more shall the new Eve triumph over him and crush his head.

“I clearly foresee that raging beasts will come in fury to tear to pieces with their diabolical teeth this little book and the one the Holy Spirit made use of to write it, or they will cause it at least to lie hidden in the darkness and silence of a chest and so prevent it from seeing the light of day. They will even attack and persecute those who read it and put into practice what it contains. But no matter! So much the better! It even gives me encouragement to hope for great success at the prospect of a mighty legion of brave and valiant soldiers of Jesus and Mary, both men and women, who will fight the devil, the world, and corrupt nature in the perilous times that are sure to come.” ( St. Louis de Montfort ).

“Jesus Christ has come to the world by means of the Blessed Virgin Mary and through Her, He also ought to reign in the world.”

Who will transform the world?

For St. Louis de Montfort, there is no doubt that only God can achieve such a difficult task. He will intervene with a “torrent of fire, love and justice” through the power of the Holy Spirit and through the many and varied maternal acts of Mary. This divine intervention will take place most particularly by means of “the apostles of the latter times.”(TD, 58) “Their task will be double: to destroy sin and to build up the Kingdom of Jesus.” Jesus will reign when, through the intervention of Mary, He will be known, loved and served.” (TD, 49) “This kingdom will be in the hearts.” (TD, 113)

But what will they be like, these servants, these slaves, these children of Mary?

“But what will they be like, these servants, these slaves, these children of Mary? They will be ministers of the Lord who, like a flaming fire, will enkindle everywhere the fires of divine love. They will become, in Mary’s powerful hands, like sharp arrows, with which she will transfix her enemies”.

“They will be true apostles of the latter times to whom the Lord of Hosts will give eloquence and strength to work wonders and carry off glorious spoils from his enemies”.

“Such are the great men who are to come. By the will of God, Mary is to prepare them to extend His rule over the impious and unbelievers. But when and how will this come about? Only God knows” .

“In these latter times Mary must shine forth more than ever in mercy, power and grace; in mercy, to bring back and welcome lovingly the poor sinners and wanderers who are to be converted and return to the Catholic Church…”

The latter days are marked by steadily increasing persecution of Christians. As Satan gains power in the world, so much more shall the new Eve triumph over him and crush his head.

“It is chiefly in reference to these last wicked persecutions of the devil, daily increasing until the advent of the reign of anti-Christ, that we should understand that first and well-known prophecy and curse of God uttered against the serpent in the garden of paradise. It is opportune to explain it here for the glory of the Blessed Virgin, the salvation of her children and the confusion of the devil. ‘I will place enmities between you and the woman, between your race and her race; she will crush your head and you will lie in wait for her heel’” (Gen. 3:15)

This Virgin road to Jesus is a path of roses and sweet delights.

“Satan fears her not only more than angels and men but in a certain sense more than God himself. This does not mean that the anger, hatred and power of God are not infinitely greater than the Blessed Virgin’s, since her attributes are limited. It simply means that Satan, being so proud, suffers infinitely more in being vanquished and punished by a lowly and humble servant of God. …God has given Mary such great power over the evil spirits that, as they have often been forced unwillingly to admit through the lips of possessed persons, they fear one of her pleadings for a soul more than the prayers of all the saints, and one of her threats more than all their other torments”

“It is true that on our way we have hard battles to fight and serious obstacles to overcome, but Mary, our Mother and Queen, stays close to her faithful servants. She is always at hand to brighten their darkness, clear away their doubts, strengthen them in their fears, sustain them in their combats and trials. Truly, in comparison with other ways, this virgin road to Jesus is a path of roses and sweet delights. There have been some saints, not very many, such as St. Ephrem, St. John Damascene, St. Bernard, St. Bernardine, St. Bonaventure, and St. Francis de Sales, who have taken this smooth path to Jesus Christ, because the Holy Spirit, the faithful Spouse of Mary, made it known to them by a special grace. The other saints, who are the greater number, while having a devotion to Mary, either did not enter or did not go very far along this path. That is why they had to undergo harder and more dangerous trials.”