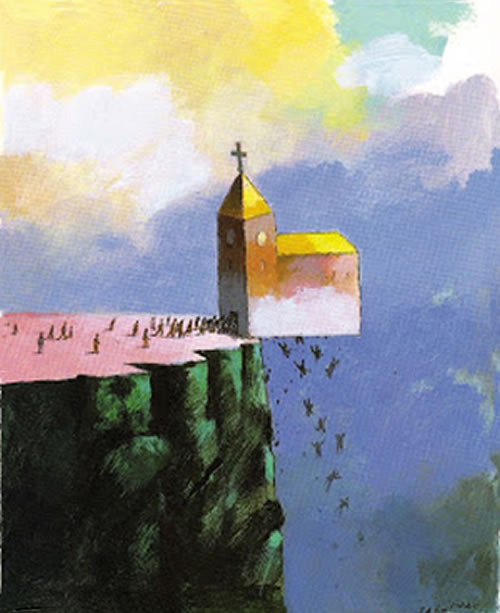 “They have indeed a strict right to know that the priests who serve them are not in communion with a counterfeit church.” Archbishop Lefebvre, “Open Letter to Cardinal Gantin”.

Comment: Priests have a great role to play in the defense of the Faith. But you also have a role to play, dear Faithful, in the defense of the Faith. This role is to require that your priests be not in communion with the destructors of the Faith. It is not by asking your priests to compromise with the destructors of the Faith that you will be faithful to God, but on the contrary by requiring from them that they do not compromise with the promoters of heresy. This is not only a strict right, as the superiors of the SSPX said. It is also a duty. To do the contrary would be to sin against Faith.

“To be publicly associated with this sanction which is inflicted upon the six Catholic Bishops, Defenders of the Faith in its integrity and wholeness, would be for us a mark of honor and a sign of orthodoxy before the faithful. They have indeed a strict right to know that the priests who serve them are not in communion with a counterfeit church, promoting evolution, pentecostalism and syncretism.“

“In union with these faithful, we make ours the words of the Prophet: “Præparate corda vestra Domino et servite Illi soli: et liberabit vos de manibus inimicorum vestrorum.Convertimini ad Eum in toto corde vestro, et auferte deos alienos de medio vestri — Open your hearts to the Lord and serve Him only: and He will free you from the hands of your enemies. With all your heart return to Him, and take away from your midst any strange gods” (I Kings 7:3).”

“I saw the fatal consequences of this counterfeit church; I saw it increase; I saw heretics of all kinds flocking to the city. I saw the ever-increasing tepidity of the clergy, the circle of darkness ever widening. And now the vision became more extended. I saw in all places Catholics oppressed, annoyed, restricted, and deprived of liberty, churches were closed, and great misery prevailed everywhere with war and bloodshed.” ~ Ven. Anne C. Emmerich.

“The False Prophet will have a religion without a cross. A religion without a world to come. A religion to destroy religions. There will be a counterfeit church. Christ’s Church [the Catholic Church] will be one. And the False Prophet will create the other. The false church will be worldly ecumenical, and global. It will be a loose federation of churches. And religions forming some type of global association. A world parliament of churches. It will be emptied of all divine content and will be the mystical body of the Antichrist. The mystical body on earth today will have its Judas Iscariot and he will be the false prophet. Satan will recruit him from among our bishops.” ~ Ven, Fulton Sheen.

To lie in the Canon of the Holy Sacrifice of the Mass and actively participate in a sacrilegious lie that affirms the legitimacy of the false or treacherous hierarchy, cannot be pleasing to God. According to the Catechism of the Council of Trent, this is a mortal sin against Faith by Apostasy, heresy, and indifferentism. 2-Thessalonians 2:12 teaches that believing a lie can cost men their souls.

St. Vincent Ferrer says that “To preach obedience to a false pope and to attribute Papal honours to him is equivalent to breaking the First Commandment of the Law of God […] What else is a false pope if not a strange god in this world, an idol, a statue, a falsified image of Christ?”

St. Cyril of Alexandria says that “It is unlawful, and a profanation, and an act the punishment of which is death, to love to associate with unholy heretics, and to unite yourself to their communion.”

Antichrist cometh, even now there are become many Antichrists

“Little children, it is the last hour; and as you have heard that Antichrist cometh, even now there are become many Antichrists: whereby we know that it is the last hour. They went out from us, but they were not of us. For if they had been of us, they would no doubt have remained with us; but that they may be manifest, that they are not all of us.” ~ 1 John 2:18-19

Related:   “THE MOST EVIDENT MARK of God’s anger” by Saint John Eudes, Doctor of the Church.

“The Horror of a Priest in Mortal Sin Giving a Sacrilegious Mass”
by St Alphonsus Liguori, Doctor of the Church.

“If the Shepherd Becomes a Wolf”

“The Antichrist: Signs of Our Times by Venerable Fulton Sheen”