This St-Benedict token is intended to be a constant, silent prayer asking for Christ’s guidance and aversion from the devil. The medal is a prayer of exorcism against Satan, a prayer for strength in time of temptation, a prayer for peace, a prayer that the Cross of Christ be our light and guide, a prayer of firm rejection of all that is evil. Size: 1 1/4″. Made in Italy.

THE POWER AND EFFECTS OF THE ST BENEDICT MEDAL

“We should make use of the Medal on all occasions when we have reason to fear the snares of the enemy. Its protection will prove efficacious in every kind of temptation. Numerous and undeniable facts attest its wonderful efficacy on a thousand different occasions where the faithful were exposed to dangers either from the direct influence of the devil, or from the effects of certain evil practices. We may also employ it in favor of others to preserve or deliver them from dangers which we foresee are threatening them. Unforeseen accidents await us on land and sea; let us carry about us the Medal of St. Benedict with faith and we shall experience his protection. Even in the most common circumstances of life, in those things which regard our temporal well-being has the efficacy of the holy Cross and the power of St. Benedict been felt. The wicked spirits, in their hatred, often molest the domestic animals or do harm to the food which should sustain life. Experience has proved that the Medal of St. Benedict, made use of with faith and prayer, has often made the snares of the devil harmless, procured a visible improvement in cases of sickness, and sometimes even effected a complete cure”. 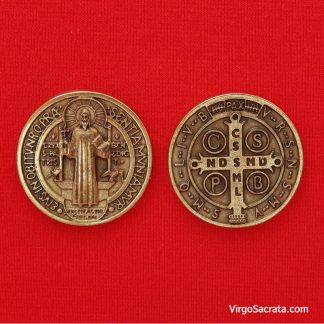