12″ black wood St-Benedict sick-call set, includes candles and holy water bottle, deluxe gift boxed.  The crucifix is constructed so that, when opened, the face of the crucifix can be set upright in a slot in the base. The base of the crucifix has two slots, one on each side of the cross for candles to be placed when priest arrives.

Saint Benedict Sick-Call Crucifix is traditionally used for Extreme Unction (the Last Rites). But recently, the Sacrament of the Anointing of the Sick is administered both to the dying and to those who are gravely ill or are about to undergo a serious operation, for the recovery of their health. It is a ritual of healing appropriate not only for physical but also for mental and spiritual sickness.

The sick-call crucifix is constructed so that, when opened, the face of the crucifix can be set upright in a slot in the base. The base of the crucifix has two slots, one on each side of the cross for candles to be placed when priest arrives.

The Saint Benedict Cross is a constant reminder for Christians to reject evil temptations, strive to perform good works, exercise true charity and justice toward all. It is a reminder of Jesus calling to take up our Cross and follow him on the path of love, compassion and unity. To follow the “true King, Christ our Lord” and not the lord of culture and convention. To be on the side of justice and bring forth the Kingdom of God. The medal of the cross of St. Benedict must be exorcised by a Benedictine Father, or by a priest especially authorized. 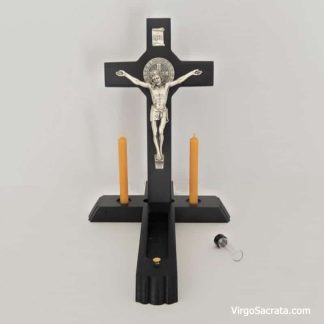