The Mass: A Study in the Roman Liturgy by Adrian Fortescue

First published in 1912, Fr. Fortescue’s liturgical-archaeological classic, “The Mass: A Study of the Roman Liturgy”, remains one of the most erudite works ever written in English on the subject of the historical development of the ancient Roman Mass up to its present Tridentine form.
438 pages, Hardcover with dust jacket.

Send Inquiry for The Mass: A Study in the Roman Liturgy by Adrian Fortescue

A classic study of the history of the Roman liturgy from the pen of Fr. Adrian Fortescue, one of the best liturgical scholars of the English-speaking world.

Part 1: The origin and development of the Mass in general; the Eucharist in the first three Centuries. The Parent Rites and their Descendants; the Origin of the Roman Rite; the Mass since St. Gregory the Great.

Part 2: Covers the Mass as we know it, adding notes to each prayer and ceremony. Bibliography for further study.

First published in 1912, Fr. Fortescue’s liturgical-archaeological classic, “The Mass: A Study of the Roman Liturgy”, remains one of the most erudite works ever written in English on the subject of the historical development of the ancient Roman Mass up to its present Tridentine form. As an authority on the liturgies of the various Eastern Rites as well as the Latin, Fortescue had a unique expertise in comparing the few historical liturgical fragments available from the New Testament, Apostolic and Patristic times to the learned opinions of his contemporaries, thereby skillfully outlining how the Roman Mass perhaps developed over the centuries. He especially focused on how the Mass organically developed from Our Lord’s First Mass, and definitively demonstrated that the traditional Roman Mass is the most ancient and venerable rite existing in the entire Church.

Essentially the Missal of St. Pius V is the Gregorian Sacramentary; that again is formed from the Gelasian book which depends on the Leonine collection. We find the prayers of our Canon in the treatise de Sacramentis and allusions to it in the IV century. So our Mass goes back, without essential change, to the age when it first developed out of the oldest liturgy of all. It is still redolent of that liturgy, of the days when Caesar ruled the world and thought he could stamp out the faith of Christ, when our fathers met together before dawn and sang a hymn to Christ as to a God. The final result of our enquiry is that, in spite of unsolved problems, in spite of later changes, there is not in Christendom another rite so venerable as ours. 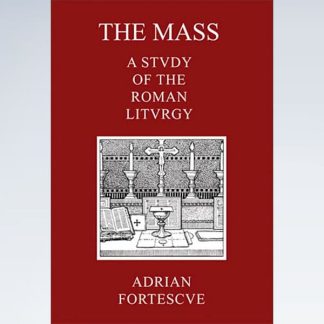 You're viewing: The Mass: A Study in the Roman Liturgy by Adrian Fortescue CAD$ 51
Add to cart