An Overview of Gregorian Chant

Send Inquiry for An Overview of Gregorian Chant

The modern liturgical movement owes a great debt to Solesmes monk Dom Eugène Cardine (1905-1988), whose tireless research in the ancient manuscripts uncovered the elusive secrets of Gregorian Rhythm, thus revealing some of the original pristine beauty of Gregorian chant. In this volume, Dom Cardine sums up the origin, decline, and restoration of the chant, and challenges researchers to continue his work.

Author Bio
Since the refounding of the monastery of St. Peter of Solesmes in 1833 under Dom Prosper Gueranger, this Benedictine monastery on the River Sarthe in western France has set the world standard both for the performance of Gregorian chant and the authenticity of the music itself. Commissioned by Pope Pius X to research the role of chant in liturgy and to edit books on chant that reflect this research, Solesmes enjoys an enviable reputation. Its work in liturgical reform and in the current revival of Gregorian chant has been likened to that of the great abbey of Cluny in the Middle Ages. These recordings incorporate new understandings of ancient manuscripts and represent a distillation of nearly 200 years of scholarship in the chant: musical paleography, semiology, and modality. The groundbreaking work by the monks of Solesmes has contributed to today’s resurgence of interest in Gregorian chant as the foundation of Western music. 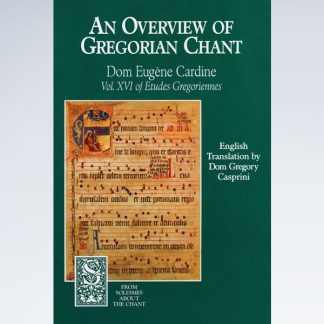 You're viewing: An Overview of Gregorian Chant €17.60
Add to cart