Our Lady of Good Success and Archbishop Marcel Lefebvre, the Prophesied Prelate for Our Times

Send Inquiry for Our Lady of Good Success and Archbishop Marcel Lefebvre, the Prophesied Prelate for Our Times

This book covers selected prophesies of Our Lady of Good Success and Archbishop Marcel Lefebvre, – the prophesied prelate for our times, who restored, maintained, and preserved Traditional priesthood.

What happens when Tradition is abandoned in favor of a more liberal approach to the Traditional sacred precepts and customs laid down by Christ, which He taught to His Twelve Apostles and which were practiced by the Church for thousands of years?

Back in the 17th Century, the Blessed Virgin Mary (who wanted to be known as Our Lady of Good Success of the Purification) made a number of appearances from February 2, 1589 to December 8, 1634 to a cloistered Spanish nun by the name of Mother Mariana de Jesus Torres,” in the Royal Convent of the Immaculate Conception at Quito, Ecuador. As recorded in the Convent records, the Diocesan Archives and in two volumes of a book entitled “The Admirable Life of Mother Mariana” by Fr. Manuel Sousa Pereira, the Virgin Mary provided a series of prophetic warning, describing the diabolical effects if what would happen once Tradition is abandoned.

As a result of the prophesied Conciliar Revolution, the Mystical Body of Christ’s holy Church suffers the diabolical effects from an abandonment of Tradition, further summarized by the Blessed Virgin Mary when She appeared to Mother Mariana on January 21, 1610:

“Satan will reign almost completely by means of the Masonic sects – the clergy and prelates will become corrupt-great impurity will reign – heresies will abound – bad Superiors will destroy the spirit of Religion – ‘ Rules’ in convents and monasteries will become abandoned – the Holy Sacraments will be profaned and abused – people will be without care for spiritual matters – the light of Faith will be almost completely extinguished in souls – truly religious souls will be reduced to a small number – and many vocations will perish.”

“Deemed as a rebel in these times of Satan’s prophesied attack on Christ’s holy Roman Catholic Church, the Celestial Father’s Archbishop Marcel Lefebvre, against all opposition, fought for, restored, and preserved the traditional spirit of the priests―as foretold by Our Lady of Good Success would be needed post the Conciliar Revolution that would bring about a crisis within the Church in the mid-20th Century. “It is thanks to Archbishop Lefebvre more than any other individual that the Mass is now being celebrated throughout the world… One might hope that all those who now assist at the Tridentine Mass each Sunday outside the auspices of the Society of St. Pius X would appreciate that they owe this inestimable privilege to Archbishop Marcel Lefebvre. In my opinion, the Archbishop is a saint and will emerge with more credit than any other prelate when the history of these troubled times is written.” ~ Michael Treharne Davies, “Apologia Pro Marcel Lefebvre”

May Archbishop Lefebvre’s brave stand in the defense of Tradition inspire all other courageous prelates to follow his saintly example, and join in the fight to bring the universal Church back into full communion with Tradition, thereby putting an end to these prophesied ominous times. “I believe that the essential point for effectively conducting a spiritual, doctrinal and moral battle against the enemies of the Church is the persuasion that the present crisis is the metastasis of the conciliar cancer. If we have not understood the causal relationship between Vatican II and its logical and necessary consequences over the course of the last sixty years, it will not be possible to steer the rudder of the Church back to the direction given it by her Divine Helmsman, the course that it maintained for two thousand years.”  ~ Archbishop Carlo Maria Viganò, May 2020. 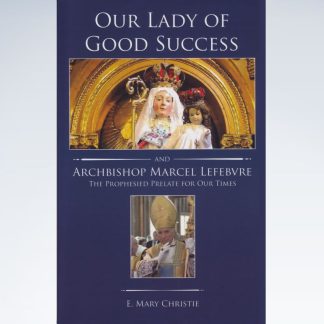 You're viewing: Our Lady of Good Success and Archbishop Marcel Lefebvre, the Prophesied Prelate for Our Times US$ 18.00
Add to cart