This digitally mastered collection of hymns and Masses sung by the Marian Sisters of the Congregation of Mary Immaculate Queen (CMRI) and the Mt. St. Michael Parish Choir is the closest thing to being in the choir loft. The unique CD was recorded nearly 20 years ago on an Otari four track and brings you soprano, alto, tenor and bass voices in unparalleled clarity and warmth. Separate SATB CD’s will also be available so choir members can easily learn their separate parts by merely listening.

Most of the music was recorded during the First Masses of several CMRI priests. Altar microphones allow you to hear the Latin prayers of the Mass, the incensation of the altar and even the bells.

Two Masses are featured: Palestrina’s Iste Confessor and a TTBB version of the Mass In Honor of Our Lady Queen of the Franciscan Order. Three Palestrina polyphonic (multiple part) compositions and 14 Catholic hymns are also included.

The devotion and prayerfulness of the choir make this recording something heavenly and thoroughly enjoyable. Since nearly everything was recorded live, there are rare occurrences of slight background noise that is no deterrent to the quality of the CD. This is in contrast to the ideal, sterile conditions found in a recording studio.

It is no small miracle that this music was preserved. The tape even had to be cooked in a convection oven for hours to retain its contents. In spite of the age and natural deterioration of the original tape, the twin priests who made the final mix hope you enjoy this “little bit of Heaven”. 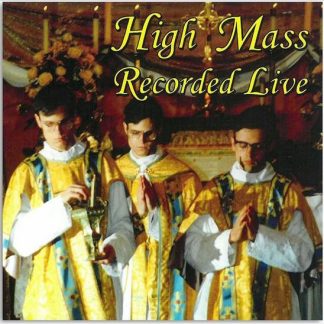