Many Catholics living today can remember when priests were well trained in theology and could express the Faith properly in their sermons and in their writing.  Complete Set of 3754 total pages. Cloth hardcover.

The Pohle-Preuss  Manual of Dogmatic Theology In Twelve Volumes has been re-issued as the complete set of 12 volumes in six books.  Many Catholics living today can remember when priests were well trained in theology and could express the Faith properly in their sermons and in their writing. That is because they were given sound teaching at the seminary in Logic, Philosophy, and Dogmatic Theology from textbooks such as this 12 volume set. The famous Pohle-Preuss manual was used in many seminaries in America and other countries prior to the 1950’s when seminary training began to go downhill.

This particular manual was used in the Jesuit seminary where Fr. Leonard Feeney, who was one called by his Jesuit superior “the greatest theologian we have in America…by far” was trained. This beautiful hardbound series is an exact reproduction of the edition originally published in 1911, and it was written by  Rt. Rev. Msgr. Joseph Pohle and edited by Arthur Preuss.

Joseph Pohle was a Jesuit and one of the founding faculty members of the Catholic University of America as well as a frequent contributor to the Catholic Encyclopedia. He died in 1922 after having produced one of the clearest and most succinct and useful systematic studies of Catholic theology ever published. This series is invaluable for priests, seminarians, and anyone interested in a systematic study of dogmatic theology.

BOOK ONE
Volume 1 – God: His Knowability, Essence, and Attributes

BOOK TWO
Volume 2 – The Divine Trinity
Volume 3 – God: The Author of Nature and the Supernatural 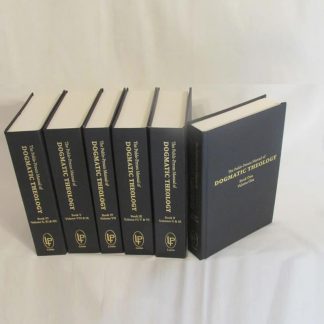 You're viewing: Pohle-Preuss Complete Manual of Dogmatic Theology – 12 Volumes in Six Books US$ 239.00
Add to cart