Callewaert combo set (in Latin only) includes 4 books: the Caeremoniale and all 3 Liturgicae Institutiones volumes at a special combo price. 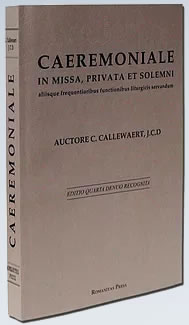 This rubrical-reference book is highly esteemed for its systematic and thorough treatment of the general principles of ceremonies. Another unique aspect—omitted in most other manuals—are the author’s ascetical explanations for the purpose of particular ceremonial actions.

Perhaps though, the best recommendation for Caeremoniale comes from a peer of Callewaert, another highly-regarded rubrician:

“This book is perhaps the clearest description of all ordinary ceremonies and is written by an outstanding authority. It is complemented by another book of the same author, De Missalis Romani Liturgia. Together these two books give a comprehensive treatment of rubrics and ceremonies. Callewaert is unusual for his depth of treatment. He gives the meaning and reason behind ceremonies whenever useful and always lists carefully his sources. His book is written in Latin and, unfortunately, is not published in this country. We recommend it without reservation…” (L. O’Connell from The Book of Ceremonies) 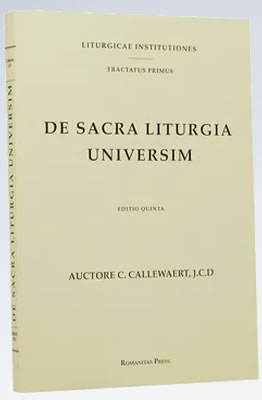 The first volume of a three-part Liturgicae Institutiones set, De Sacra Liturgia Universim is a comprehensive study on liturgical matters for both the clergy and laity.

Published in its final edition posthumously after Callewaert’s death on the Feast of the Transfiguration of Our Lord in 1943, this liturgical work is perhaps his crowning glory.

The American Ecclesiastical Review (Volume 62) had this to say about De Sacra Liturgia Universim in its book review of 1920:

The present volume is the introductory one to a series comprising the liturgical interpretation of the Breviary, Missal, Ritual, and the ecclesiastical cycle under the title Annus ecclesiasticus.

The author treats his subject of the Liturgy in general not merely as a Prolegomena* but as a distinct branch of the Institutiones Liturgicae [foundations of the liturgy]. Accordingly he distinguishes cult or worship from the liturgical expression of the same, as set forth in the history of the Church. The first part enters upon the analysis of the subject in its broad aspects, considering the end and purpose of the liturgical service, the principal and secondary ministry, the fruits, from the doctrinal, moral, and ascetical points of view. The historical aspect begins with the apostolic tradition and follows up the successive practice and legislation through the periods of Oriental, Gallican, Roman, and various local usages, down to the reforms of Trent and the evolution of the seventeenth to the twentieth century.

*[NB: a formal essay used to introduce and outline an extended work.]

The latter half of the volume is devoted to an inquiry into the sources of liturgical legislation, the early collections and the interpreting bodies such as the Sacred Congregations. A special article is devoted to the study of the texts, the preferences and corrections represented by the literary monuments and typical editions of the Roman liturgy. The final chapter, “De Liturgica Scientia ejusque Methodo”, is intended to guide the student in the systematic inquiry as to the manner of exposition. There is a chapter on customs, also a good analytical index. The author has in press a practical guide on the Mass, under the title Caeremoniale in celebrandis Missis tam privatis quam solemnibus, in Vesperis et Laudibus SS. Sacramenti servandum. 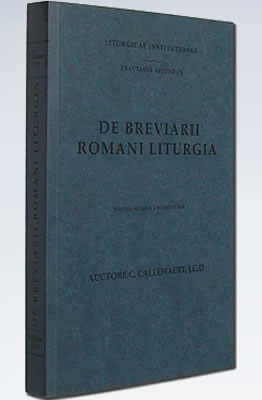 A comprehensive work on the historical development and principles of the Roman Breviary. As further exposited via a contemporary book review:

…starting with this sublime vision, Msgr. Callewaert, like a fine Belgian microscope, zeroes in first on the larger aspects of the Liturgical Year, the seasons, the weeks, and the canonical hours.

He exposes the beauty of the structure of each part of the Office, and shows how it relates to the whole perfect construct. There is no aspect of the Breviary that is not concisely described, and the historical precedents are laid out like the finest details of a beautiful tapestry.

Those with an interest in monastic practice, both East and West, cannot fail to appreciate the breadth and depth of the author’s knowledge… Priests who absorb part of his spirit, might then pray, and feel how they are united to every generation of priest and monk, through space and time, back to the apostles themselves. 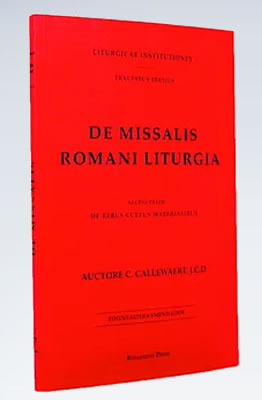 As denoted by its subtitle, De rebus cultus materialibus, this frequently-cited book covers liturgical material requisites such as the sacred vessels, vestments and linens, the form of the altar and its corresponding appointments, the symbolism of the various colors, the church edifice and more.

As attested in the book’s approbatio by Bishop Henricus Lamiroy (1883-1952) of Bruges (Callewaert’s local ordinary):

We freely approve this third volume of Liturgical Institutions, the subject matter of which is the Liturgy of the Roman Missal. In this volume, the author, with great erudition and astute judgment of documents, expounds the origin and evolution of the material elements as well as the rules to be followed in their use. We are confident that this precious volume will effectively contribute to a further understanding of the liturgy, to the splendor of worship as well as to a wholesome piety of priests and lay people.

And as mentioned in The Book of Ceremonies by L. O’Connell while speaking of Callewaert’s Caeremoniale:

This [book] is perhaps the clearest description of all ordinary ceremonies and is written by an outstanding authority. It is complemented by another book of the author, De Missalis Romani Liturgia. Together these two books give a comprehensive treatment of rubrics and ceremonies. Callewaert is unusual for his depth of treatment. He gives the meaning and reason behind ceremonies whenever useful and always lists carefully his sources. His book is written in Latin and, unfortunately, is not published in this country. We recommend it without reservation… 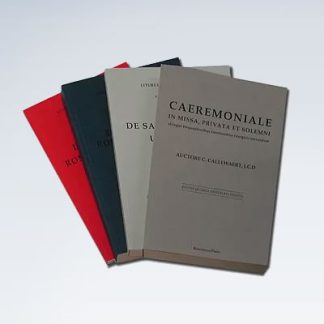 You're viewing: Caeremoniale and 3 Liturgicae Institutiones Volumes US$ 138.00
Add to cart