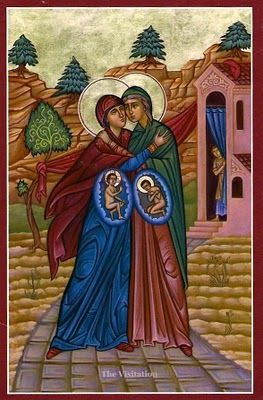 The Magnificat is a canticle, also known as the Song of Mary, the Canticle of Mary and, in the Byzantine tradition, the Ode of the Theotokos. The text of the canticle is taken directly from the Gospel of Luke (1:46–55) where it is spoken by Mary upon the occasion of her Visitation to her cousin Elizabeth.

An explanation of the Canticle Magnificat is given below from the “Devout instructions on the Epistles and Gospels for the Sundays and holydays” by Leonard Goffiné (1648-1719).

In this hymn Mary with joy praises God, the Lord, that He has regarded her humility, and made her to be the Mother of His only-begotten Son, wherefore she should be called blessed by all generations; and she declares the truths and mysteries which the incarnation brought to light.

The mercy of God, namely, reaches from generation to generation to them that fear Him. He scatters the thoughts of the proud, and puts down from their seats the mighty; but He exalts the humble. He fills those who hunger for justice with good things, but those who think themselves rich He sends away empty. He receives all true Israelites, and performs in them the promises which He gave to the fathers.

This hymn is repeated by the Church every day at Vespers, in praise of the work of redemption, begun by the incarnation of the Son of God in Mary. Would that every Christian, since he becomes one only by Christ being, as it were, born in him, might share those feelings which the Blessed Virgin and Mother has expressed in this hymn of praise, and, with the Church, daily praise God for the mystery of the incarnation.

The Magnificat in Latin and English Translation

Magnificat chanted by the Daughters of Mary