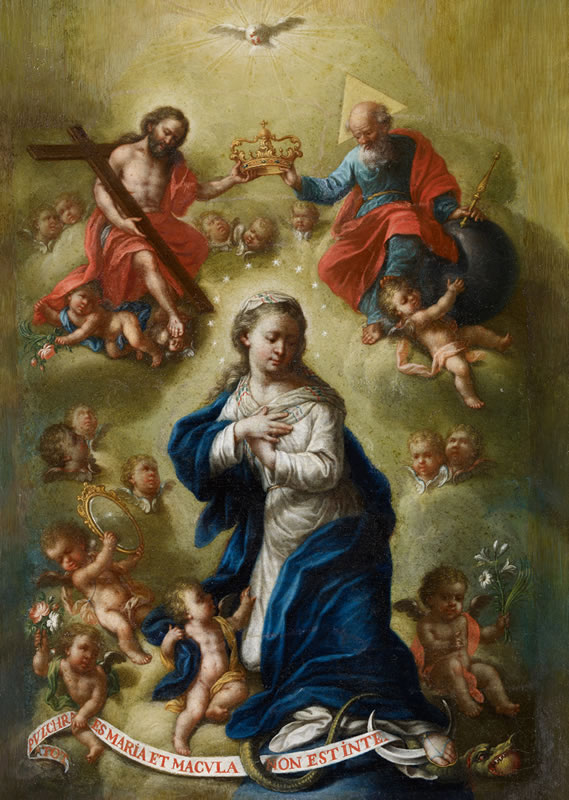 The month of May is dedicated to the Mary, whom we celebrate as Queen of Heaven on the last day of this month. Early in May, a statue of the Virgin at church is crowned with a wreath of roses, and the same are laid at her feet.

This Christian custom of dedicating the month of May to the Blessed Virgin arose at the end of the 13th century. In this way, the Church was able to Christianize the secular feasts which were wont to take place at that time. In the 16th century, books appeared and fostered this devotion.

Honor Our Lady with the following practices:

The Regina Coeli (Queen of Heaven)

Regina Coeli prayer, said standing, is used to replace the Angelus prayer during Paschaltide. The partial indulgence may be gained if one who does not know the words to this prayer replaces it with 5 Hail Marys.

For centuries, the Rosary was known as “Our Lady’s Psalter“.  In the Middle Ages, common lay people wanted to join their prayers with the Holy Monks who daily recited the Psalms. The modern Rosary is one of the most excellent prayers to the Mother of God. Thus, “the Roman Pontiffs have repeatedly exhorted the faithful to the frequent recitation of this biblically inspired prayer which is centered on contemplation of the salvific events of Christ’s life, and their close association with the Virgin Mother.”

The Little Office of The Blessed Virgin Mary

Pray the inspired psalms of the Holy Ghost. The Little Office of the Blessed Virgin Mary was originated as a monastic devotion around the middle of the eighth century.

Litanies of the Blessed Virgin Mary

These consist of a long series of invocations to Our Lady, which follow in a uniform rhythm, thereby creating a stream of prayer characterized by insistent praise and supplication. Listen to the Litany of Loretto – a prayer which asks for the intercession of Our Lady under many of her beautiful titles.  Like the Rosary, it is primarily an act of praise and devotion to the Blessed Virgin.

Consecration and Entrustment to Mary

St. Louis de Montfort is one of the great masters of the spirituality underlying the act of “consecration to Mary”. He “proposed to the faithful consecration to Jesus through Mary, as an effective way of living out their baptismal commitment.” First, read “True Devotion to the Blessed Virgin,” written by St. Louis de Montfort himself, and decide for certain whether to consecrate yourself to Jesus through Mary.  Two chapters from this books are available on our web site: Marks of Authentic Devotion to Our Lady and Marks of False Devotion to Virgin Mary. Read carefully, and don’t take this lightly; consecrating oneself has the character of a vow.

The Brown Scapular and other Scapulars

The scapular is an external sign of the filial relationship established between the Blessed Virgin Mary, Mother and Queen of Mount Carmel, and the faithful who entrust themselves totally to her protection, who have recourse to her maternal intercession, who are mindful of the primacy of the spiritual life and the need for prayer.

Floral imagery from scripture and nature has been applied to Mary in the writings of the Church Fathers and in the liturgy, providing the foundation in tradition for the subsequent naming of hundreds of flowers for Mary’s life, mysteries, virtues, excellences and divine prerogatives in the popular religious folk traditions of the medieval countrysides. The practice of honoring Mary with flowers originated among monasteries and convents in medieval Europe. Beautiful Virgin Mary garden statues are available from the Virgo Sacrata to help you with design of your own Marian Garden at home, or your parish.

These are witnesses of faith and a sign of veneration of the Holy Mother of God, as well as of trust in her maternal protection. The Church blesses such objects of Marian devotion in the belief that “they help to remind the faithful of the love of God, and to increase trust in the Blessed Virgin Mary.”

The Akathist Hymn to the Blessed Virgin Mary

In the Byzantine Catholic, Eastern Catholic and Christian Orthodox tradition, the Akathist is one of the oldest and most revered expressions of Marian devotion, meaning the hymn sung while standing. Although there is some debate concerning the particulars of its authorship, many scholars agree with the pious tradition which states that the Akathist was composed in the imperial city of Constantinople, “the city of the Virgin,” by St. Romanos the Melodist, who reposed in the year 556.

In the West, the Akathist is an indulgenced prayer (indulgenced by Pope Benedict XIV in A.D. 1746); in the East, it is a liturgical prayer that either is offered in 4 sections (as a part of Compline) starting on the first four Fridays of Lent and then repeated in its entirety on the fifth Friday of Lent, or is offered starting on the fifth Friday before the Annunciation (25 March) as a preparation for that Feast (this last is the original purpose of this hymn).

The AKATHIST HYMN is a theological masterpiece, a truly contemplative expression and praise of the mystery of the Blessed Virgin Mary, encapsulating in the form of a prayer, and one of the most well-loved services of devotion in the Russian Orthodox Church. This devotion unites the Roman Church with the Churches of the East, Orthodox and Catholic alike.