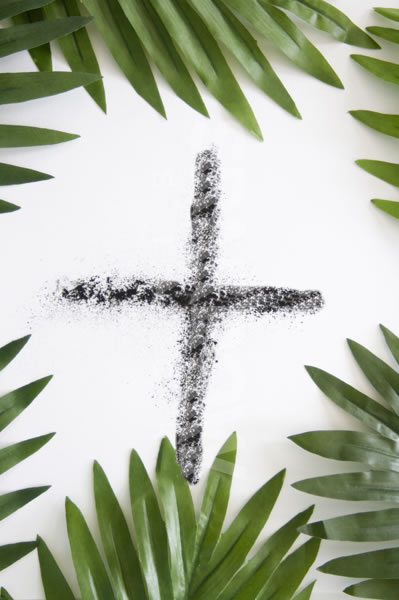 The use of ashes, especially the sprinkling of ashes on the head as a sign of humiliation and sorrow, dates back to the cradle of the human race. Numerous references are made to it in the Old Testament. David, the model of penitents, says: “I did eat ashes like bread, and mingled my drink with weeping.” The Ninivites, at the preaching of Jonas, “proclaimed a fast, and pat on sackcloth from the greatest to the least, and sat in ashes.” Judith put ashes on her head when she prayed for strength to overcome Holofernes, the leader of the enemies of her people. And the prophet Jeremias cries out :

“Howl, ye shepherds, and cry: and sprinkle yourselves with ashes, ye leaders of the flock: for the days of your slaughter and your dispersion are accomplished, and you shall fall like precious vessels.” — Jeremiah 25:34

Not so the child of God, whose mind has been illumined by the light of revelation. He early learns that he must chastise his body and keep it in subjection; that if he neglects or refuses to do penance he is in danger of perishing ; and that in all things he must remember his last end and his return to the dust from which he was taken, if he is to avoid sin and attain everlasting life. Conscious that he is by nature a child of wrath, he studies to appease an offended God by the practice of penance and mortification ; and remembering that he is formed from the dust of the earth, and doomed to return to it again, he humbly sprinkles the noblest of his members, the head, with dust. In the light of revelation this is perfectly natural to him.

The ceremony of blessing and distributing the ashes, as we have it at present, like many of the other ceremonies of the Church, comes down to us from the earliest ages. It is probable that it was introduced by the converts from Judaism, or at least in imitation of a somewhat similar practice in vogue among the chosen people. Like some of the other ceremonies, too, it has undergone certain minor changes before assuming its present form. The principal of these will be noticed as we proceed.

Ash-Wednesday, the day upon which the faithful are signed with the ashes, was called by early writers caput jejunii, or, the beginning of the fast, although up to the time of Pope St. Gregory the Great, at the close of the sixth century, the fast did not commence till the Monday following the first Sunday of Lent. With the Sun days deducted, this left but thirty-six fast-days, which, constitute about one-tenth part of the year — a circumstance which led some of the Fathers to remark that it was giving a tithe of the year to God, after the example of the Jews, from whom He required a tenth part of their produce. But the forty days fast of Moses and Elias, and more especially of our divine Redeemer, showed the propriety of increasing the number of fast days to forty; and accordingly the four days before the first Sunday of Lent were added. This took place about the beginning of the eighth century, first, it would appear, by a capitulary of the Church of Toulon, in 714. Amaury (about 820) describes the Lenten usages of his time as identical with ours. But this manner of celebrating the fast did not become general for centuries; and it was not until the time of St. Charles Borromeo, who flourished in the sixteenth century, that the Church of Milan introduced the custom of beginning Lent on Ash-Wednesday.

At first no persons were signed with the ashes but the public penitents, who were required to appear, clad in the garb of penance, at the door of the church on Ash-Wednesday morning. Says Barry (pp. 67, 68) :

“The course of penance for those who were to be reconciled on Holy Thursday began on Ash-Wednesday. The penitents, having confessed their sins, came to the church on that day with bare feet and in the habit of mourning, and humbly begged from the bishop canonical punishment. The pontiff then clothed them in sackcloth, scattered ashes on their heads, sprinkled them with holy water, and recited the Seven Penitential Psalms over them, whilst the attending clergy lay prostrate on the ground. The bishop and his ministers then imposed hands on them, to ratify, as it were, their solemn consecration to the course of penance. This ceremony was followed by a pathetic exhortation, in which the bishop announced to the weeping sinners before him that, as God had driven Adam from Paradise, so was he obliged to exclude them for a time from the spiritual paradise of the Church. With sorrowing hearts and countenances, the penitents marched in slow procession to the of the church. The bishop thrust them out with his pastoral staff, and they passed not again the thresh old of the house of God until Holy Thursday. During this touching ceremony the clergy chanted the words which God addressed to fallen man when driving him from the earthly Paradise : Remember, man, that thou art dust, and unto dust thou shalt return. Do penance, that you may have eternal life. ”

Soon others of the faithful joined the penitents in receiving the ashes, partly out of humility, and partly as a more effectual means of doing penance for their sins; and the number of these continued to increase as time went on. Local Church authorities next devoted their attention to the matter.

The Council of Beneventum, held in the year 1091, decreed that all, clergy and laity, men and women, should present themselves to be signed with the ashes. Other churches followed, and by the thirteenth century the custom became universal, and so it has continued.

The ashes used for this ceremony are procured by the burning of the blessed palm of the previous Palm Sun day; a circumstance which reminds us that we cannot bear the palm of victory over Satan, sin, and death unless by the practice of humility and mortification during life, and by paying the debt of sin in giving our bodies to the dust at the close of our earthly existence.

The form of blessing the ashes, like all the other ceremonies of our holy religion, is very beautiful and expressive; but it is difficult to tell at what time this form was adopted, or whether the ashes with which the public penitents were signed in the early ages were blessed or not. It is most probable, however, that they were, on the general principle that whatever the Church makes use of in her sacred ceremonies first receives a blessing. But whether this blessing was less solemn at first than later, when it became general, it would be difficult, if not impossible, to determine. We shall examine it as it is at present, remarking that, according to several decrees of the Sacred Congregation of Rites, the ashes are to be blessed by the priest who is to celebrate the Mass that follows. (De Herdt, vol. iii. p. 25.)

In the performing of the blessing the priest is vested in amice, alb, and violet stole and cope. Proceeding to the altar, on which the ashes are placed, at the Epistle side, in a suitable vessel, he reads an antiphon and four prayers.

In the first of these Almighty God is besought to spare the penitent sinners who invoke Him, and to send His holy angel from heaven to bless and sanctify these ashes, that they may become a salutary remedy for all who invoke His holy name, and who, conscious of their transgressions, call upon His loving kindness; and to grant to all upon whom they are sprinkled health of body and salvation of soul.

The second prayer begs of God, who desires not the death of the sinner, and who knows the frailty of man, to bless these ashes, which are to be used in token of humility and for the purpose of obtaining forgiveness ; that we, who know ourselves to be but dust and ashes, may obtain the divine mercy, the pardon of our sins, and the rewards promised to the penitent.

The third prayer asks the mercy of God and the spirit of compunction for all those who are signed with the ashes, and that they may be firmly established in the friendship of God.

In the last prayer God, who pardoned the Ninevites who did penance in sackcloth and ashes, is besought to grant us the grace to imitate their penance, that we may receive a like pardon. The ashes are then sprinkled with holy water and incensed, After which they are distributed to the faithful, as we are accustomed to witness ; the priest reciting, as he signs each one, “Remember, man, that thou art dust, arid unto dust thou shalt return.”

During the distribution of the blessed ashes certain antiphons from the Scripture and other sources, which are calculated to awaken a spirit of penance, are sung at least in such churches as have a choir capable of singing them; and it is greatly to be regretted that, owing to circumstances, many churches have not such trained singers. This part of the ceremony over, the priest returns to the altar and recites the following concluding prayer :

“Grant us, O Lord, to begin our Christian warfare with holy fasts ; that as we are about to fight against the spirits of wickedness, we may be defended by the aid of self-denial. Through Christ Our Lord. Amen.”

The celebration of the Mass then follows. At one time it was customary, at least in many places, to dampen the ashes before using them; but the Holy See has forbidden this, and they are to be applied in a perfectly dry state. It is also a common custom of our time for people to ask the priest to give them some blessed ashes to take home to the sick, or to others who have not been able to be present at the distribution. This is also forbidden by a decree of the Sacred Congregation of Rites; and what remains is to be put into the sacrarium, or place where things that are blessed and can no longer be used are thrown, as the water used in baptism, that used at Mass, etc.

Source: “THE SACRAMENTALS OF THE HOLY CATHOLIC CHURCH” BY REV. A. A. LAMBING, LL.D.,
Nihil Obstat and Imprimatur. NEW YORK, September 1, 1893.